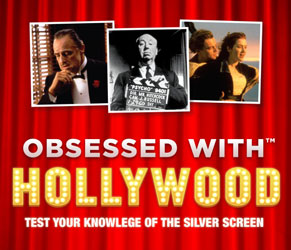 Of course you love movies but how well do you know movies? That's the question answered in the fun new iOS app Obsessed with Hollywood.

Playable on iPhone, iPod touch, and iPad devices, this game challenges with some stupefying film trivia. The app presents you with two modes of play, "25 Questions" or "Endurance." Either way you get movie-centric questions with four possible answers. You have two lifelines to help you along the way.

The 25 Questions mode is more rapid-fire with a question timer that deducts possible point values for a right answer. Endurance doesn't have the timer but will end the game once you get five wrong. I challenge you to make it through to 25 in Endurance.

Obsessed with Hollywood is very appropriately named. I consider myself pretty good at film trivia but these questions are super difficult. It requires you to have an obsessive amount of movie knowledge. There are a number of questions concerning recent films but it seems the majority come from pre-1960s subjects. It would be nice to see differing levels of play from novice to expert.

The best part of the app is its Game Center support. You can compete against your friends' scores or strive to rank highest on the worldwide leaderboard. The app made it apparent who is the more knowledgeable between my cohort John (a.k.a. Cooter31) and myself (a.k.a. tmbr).

The game is produced by mobileAge, makers of Leonard Maltin's Movie Guide app. I find it to be an even better reference piece than the popular IMDb app. However, it is a little weird seeing the movie critic's smiling face as the app icon on your iPhone screen. It makes a strong supporting role on Doug Benson's Doug Loves Movies podcast.