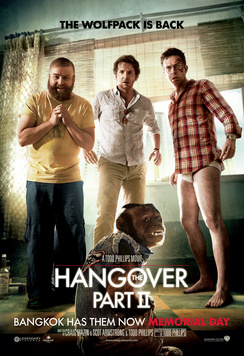 Every year, Tim and I play prognosticator and try to predict the highest grossing movies for the coming year. Given that we just made the halfway turn on 2011, we thought now would be as good of a time as any to reflect back on our work.

I think it's safe to say that we bombed miserably. Across the board, Tim is kicking my butt, but I think his prediction of Cars 2 being the top grossing movie the year will ultimately be his undoing.

In case you're too lazy to click on the link above and compare, we'll simply reprint our picks below.

For those scoring at home, here are the actual top 10 at the box office for 2011 (through June):

While I can't say that I'm too surprised about the actual receipts this year so far, I will say our love affair with animated movies might be waning. There were many animated films that seemed to underperform during the first half of 2011. On the flip side, adult-skewing comedies seem to be back in a big way with twin hits The Hangover 2 and Bridesmaids.

Friend of the site Steve Valeri shared with us some research he did over on his site Stevebiscuit that also took a look back at the first half of 2011 in the form of two really cool graphs. 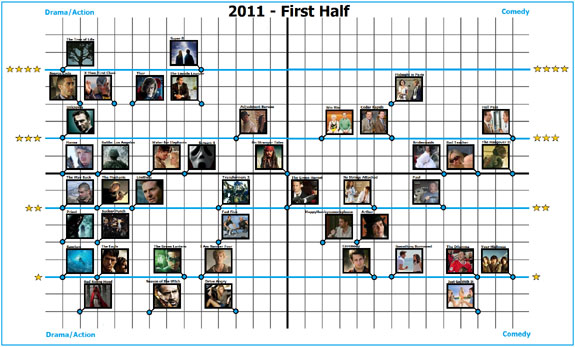 The first graph above plots out the 2011 releases by genre and Steve's personal ratings. You can get a larger, higher resolution image by clicking on the chart.

That graph shows that there have been almost twice as many drama/action movies released so far in 2011 than comedies. Given the performance of the laughers so far this year, I bet we'll see those numbers change in 2012.

The second graph below is really interesting in my opinion. It tracks the 2011 releases by Rotten Tomatoes Ratings against box office performance. 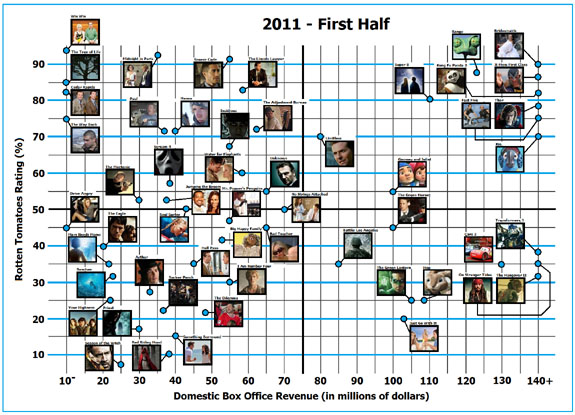 Right away, the first thing to jump out at you is just how hard it is for movies to reach "blockbuster" status. There are only 19 movies that have surpassed $75 million in box office earnings. There's about double that many that he has graphed and many other limited releases that don't register.

According to Box Office Mojo, there's at least 121 (probably more) movies released in 2011 that haven't surpassed $75 million in box office.

Another interesting observation seems to disprove the theory that critics hate successful movies. Of the 9 movies that surpassed $140 million at the box office, six of them scored not only as fresh, but surpassed 70% fresh.

Of course, critical acclaim still doesn't guarantee box office prominence. The three highest rated movies all earned less than $55 million. Although I will say that these numbers might be skewed and I would love to compare this graph with one from the end of 2011 as most of year's critically acclaimed movies with the highest potential for earning power are released to coincide with the awards season.

We'll have to check back with Steve then, in the meantime though be sure to check out his site and for new and interesting graphs and content.