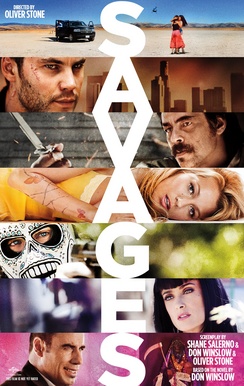 Editor's Note: This is a new feature where John and Tim dissect a newly released movie trailer in a point/counterpoint style debate. In this inaugural installment, Tim argues in favor of Savages while John disapproves. You, dear reader, get to view the evidence and decide who's right. The rest of the world will decide the film's fate.

TIM: Once upon a time, Oliver Stone was a highly regarded film director. Platoon. Salvador. Wall Street. Talk Radio. Born on the Fourth of July. The Doors. JFK. Natural Born Killers. You'd be hard pressed to find a better director from the period 1985-1995.

Then the wheels started falling off the bus. I'd pinpoint Nixon as the beginning of his down turn. Quentin Tarantino kinda usurped his style to become the shock director of the '90s. Perhaps Stone's films got a little too preachy. Even a 2010 revisit to one of his best characters, Wall Street: Money Never Sleeps, left audiences wondering where the Oliver Stone of old had gone.

Well, with the just released trailer for Savages, it seems Oliver Stone is back -- and yes -- better than ever.

Savages is a crime thriller anchored by rising stars Taylor Kitsch, Aaron Johnson and Blake Lively. Kitsch and Johnson are "entrepreneurs" who bite off more than they can chew when a Mexican cartel moves in. Salma Hayek and the always great Benicio Del Toro are the bad guys while John Travolta is a rogue DEA agent.

The trailer reminds me quite a bit of Blow (a very underrated film in my book). It's got likeable protagonists and clearly defined bad guys. Throw in some action and a love triangle, you've got a bona fide hit. And the perfect vehicle for Oliver Stone to get back on the positive side.

Check out the trailer below and see what you think. I have a hunch there will be a dissenting opinion shortly thereafter.

JOHN: To quote college football analyst Lee Corso, "not so fast, my friend!"

I like Oliver Stone, I really do. Some days I quietly recite "back and to the right, back and to the right"* to become centered. I do agree with you Tim that he's been in a bit of a slump lately, but I'm not ready to pronounce his second coming yet, despite the proximity of this trailer's release to Easter.

The trailer starts out with everything going right for it. The moody black and white and Blake Lively telling the audience to shelve their expectations for this is a story unlike no other really set the hook for me.

But, unlike a champion angler, Stone doesn't reel me in. The trailer quickly goes downhill from such a promising start to rehash every other movie in the same genre that we've seen a million times over. Yep, there's Heat. A nod to Traffic. Is Benicio Del Toro playing the same role over and over again? Pretty much.

I get it. It's a cautionary drug/crime tale with a love triangle. Where have I seen that before? Blow. Traffic. Swordfish. Pulp Fiction. Jackie Brown. Every Quentin Tarantino film. And on and on.

There's a reason that these type of movies are derivative, audiences eat them up with a spoon and beg for more. However, in this case, I think the only thing they'll be getting is stale bread.

Sadly, the curse of Taylor Kitsch continues as this will mark the third bomb of the Summer for Riggins. Bombs are good when they appear in his soon-to-be flop Battleship, but they don't do much for his career. I have a feeling that this movie will be the last time we hear of Kitsch for a long while.

And what's up with Salma Hayek as a drug kingpin? Is anyone buying that? The trailer almost starts to work for me, but then it grinds to a halt when she opens her mouth. Had they simply focused on Benicio Del Toro and cut Hayek out of the trailer completely, they would have been better off.

Finally, being squeezed between The Amazing Spider-Man and The Dark Knight Rises is a surefire way to be a non-starter at the box office. Look, I'm a big Oliver Stone fan, but I just think that whatever sent his career off course isn't going to be rectified in Savages.

The trailer works best when it resembles The Boondock Saints. I can only hope that the rest of the trailer is misleading and this offering is more similar to that movie. If so, then there's a potential for Stone to reverse the curse. If not, then I'll simply continue to recite, "back and to the right, back and to the right"* until the next movie comes down the pipeline.

Which side are you on? Does this movie look good to you? Let us know. Savages arrives in theaters on July 6. 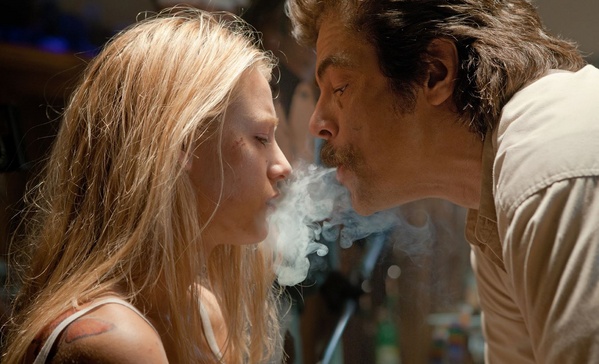 * It seems that eagle-eyed reader Stephen, also from the great state of Tennessee, caught my foggy recollection for the imposters they seem to be. As anyone who has seen JFK or the Zapruder film can attest, the line and motion is "back and to the left." Perhaps I was watching JFK in a mirror with garbled audio, or I simply shouldn't try to recall something strictly from memory on a Monday morning. Either way, I was wrong. There you go every ex I've ever had, I admitted that I was wrong.