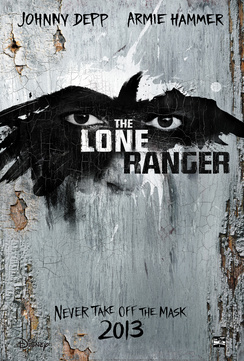 If you feel a hint of deja vu after watching the latest trailer for The Lone Ranger, you're not alone. A man in western attire wakes up in a daze unsure of who he is or where he is.

If you think I'm describing the start of the Cowboys & Aliens trailer, I could be. I could also be describing the opening of the newest offering from The Lone Ranger.

Swap out Armie Hammer for Daniel Craig and it plays almost the same. Of course, the comparisons stop when Armie Hammer finally gets his wits about him and sees that he's perched high on a tower on a perilous rocky outcropping.

Well, that and Johnny Depp doing his best Horse Whisperer impersonation. Overall, the trailer is over the top as you would expect from Jerry Bruckheimer and Gore Verbinski and the action is perfectly mixed with comedic elements to make sure that everyone is completely clear that this is family film.

Actually, the trailer also reminded me a lot of the trailers for the Sherlock Holmes movies. And that is a good thing because if The Lone Ranger can capture that delicate blend of action and comedy, then it might just be fine come Summer.

Believe it or not, this wasn't the best trailer to come out today. Have you checked out our story on the trailer for Man of Steel?