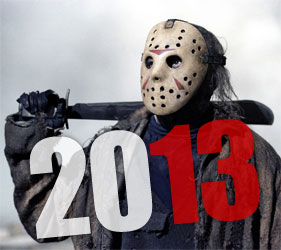 I can only imagine that they might want to skip this year entirely and fast forward to 2014, but I say embrace the 13. The only way to conquer your fear is to face it head on, so enjoy our little Jason Voorhees reminder that for the next 354 days or so, it's all coming up 13.

So, the question remains whether 2013 will be lucky for us or live up to its dour connotation. While the year is still young, we might as well get around to some of or annual traditions here on the site.

One of these traditions is our annual box office prediction for the year where Tim and I attempt to foresee which films will gross the most box office dollars in the given year. Sometimes we do really well, like my guess of $451 million for The Dark Knight Rises (actual: $448 million), but mostly we crash and burn like I did with my Skyfall guess of $172 million ($297 million actual).

Tim had his ups (The Amazing Spider-Man guess: $264 million, actual $262 million) and downs (The Bourne Legacy guess: $219 million, actual: $113 million) too, but overall we probably did the best that we've ever done at guessing which films would make the top 10. We got 7 out of the top 10 correct, but really can you blame us for missing on Ted?

But, it's a clean slate and Tim and I feel good about 2013. I'm not sure why exactly as we quickly realized that there are a ton of huge Sci-Fi extravaganzas on tap for this year. You only have to look at last year's John Carter to realize how risky of a proposition that can be.

Despite that though, Tim and I feel comfortable with our rankings. We played the percentages and kept the trends alive. We stuck mostly with sequels, comic book adaptations and animated fare to round out our top 15 spots.

Of last year's top 15 performers, only Ted bucked these three rules to be the only true original work in the top box office chart. So, what will be this year's Ted? Only time will tell, but neither Tim or I are betting on there being one.

How did we do? Check back next week when we delve into our sleeper picks and other fun that help us to make January a little bit more bearable.