Movies, celebs you can expect for Sunday's Super Bowl ads 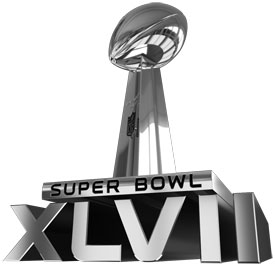 I don't know about you, but I can't wait to sit down in front of the TV Sunday evening for the big event. That's when we get to see supermodel Kate Upton in not one but two commercials for Mercedes. I hear they're celebrating the occasion with a football game in New Orleans.

When your favorite NFL team falls out of the playoffs, as my beloved Colts did, you have to look to other things for enjoyment. Kate rarely disappoints.

Like lots of Americans, I'll be tuning into the Super Bowlâ ¢ for the whole spectacle of it all. The biggest portion of that, besides the football game, is the bevy of high-priced commercials. It's fun to see $4,000,000 get disposed of in just 30 seconds.

Hollywood's big movie studios are among the advertisers who've lined up to pay that huge sum, on average, for a spot. Here are the upcoming films you can expect to see featured on Sunday night's telecast.

Paramount has two contenders in the Super Bowl. They're pimping out director J.J. Abrams' latest sci-fi adventure with a commercial. Reportedly the STID spot will air during the second quarter of the game. An ad for the Brad Pitt action flick World War Z is set for the pre-game.

The Lone Ranger, Iron Man 3, and Oz: The Great and Powerful

Disney has ponied up for three spots. The Lone Ranger ad will run during the pre-game. You can see two ad teases below. Disney, along with Marvel, is running a commercial for Iron Man 3.

The Fast and the Furious 6 and (most likely) Oblivion

Universal is airing two ads as well. Vin Diesel confirmed an ad for F&F6 via his Facebook page. The odds-on favorite for Universal's second spot is the Tom Cruise sci-fi vehicle Oblivion.

Along with those films, you can expect to see several of your favorite stars in ads for other companies. Here are some of the big celebs starring in 30-second performances:

In addition to hawking Pepsi, Beyonce is performing (we can't confirm if she's singing) during the Super Bowl Halftime Show. Rumors abound that reunited Destiny's Child will appear along with Beyonce's hubby Jay-Z.

Frequent readers of this site will remember that we're big on predictions. My partner-in-forecasting-crime thinks it'll be a painful 9-6 game with the 49ers winning in overtime. I'm a little more optimistic and diplomatic. I confidently believe we'll see Coach Harbaugh hoisting the Lombardi Trophy.

It seems the world of TV advertising is ever-changing. If we get news of additions or changes, we'll update them here. As they say in the business, stay tuned!