Ben Affleck, 'Argo' get last laugh at the Oscars 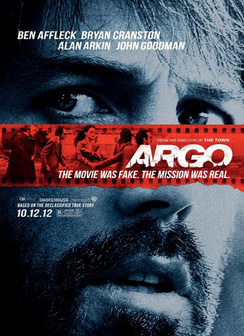 In what will forever be remembered as the "Great Snub," Ben Affleck got the last laugh on the Academy of Motion Picture Arts & Sciences when his film Argo took home the evening's top honors. It was the first time since Driving Miss Daisy in 1990 that director of the Best Picture winner wasn't also nominated for Best Director.

And it wasn't like Affleck was just being nominated at the various other awards shows, he was winning Best Director at all the big stops including the DGAs and the BAFTAs. I think Grant Heslov said it best when he thanked Ben for all of his hard work on the picture before turning the mic over to his fellow producer.

Snub aside, the 2013 Oscars telecast will go down as one of the more entertaining Academy Awards shows ever, even if the night's theme was a bit played out. Telecast producers Neil Meron and Craig Zadan are huge musical enthusiasts having produced Oscar winner Chicago and current musical TV series Smash, but the musical flourishes got a bit much as the three and a half hour show wore on.

The problem wasn't so much that it was a musical montage per se, but rather the production took the spotlight off of host Seth MacFarlane. The first-time host was actually holding his own on the world's grandest stage and we couldn't help but long for more of his wit at times to keep our energy levels up.

Here's a video of Seth's opening after the monolog when he went tit for tat with William Shatner. Speaking of, this video also includes the incredibly hilarious musical number "We Saw Your Boobs" which sought to put into song the unusually high number of Best Actress winners who disrobed in the role in which they won an Oscar.

Aside from MacFarlane, the night had a few high moments and low moments, but the Oscars telecast fought with its same old nemesis, it's incredibly long show. Despite using the theme from Jaws to hurry on those winners who took a bit too much time during their acceptance speech, the show still surpassed six hours in length.

And then there were the odd pairings, such as most of The Avengers assembling on stage to hand out a few awards. It got us thinking. Even more so than what Thor and Black Widow could possibly have that is more pressing than presenting at the Oscars.

It got us to think about how the real geek watches the Oscars and my partner in crime came up with this little graphic. 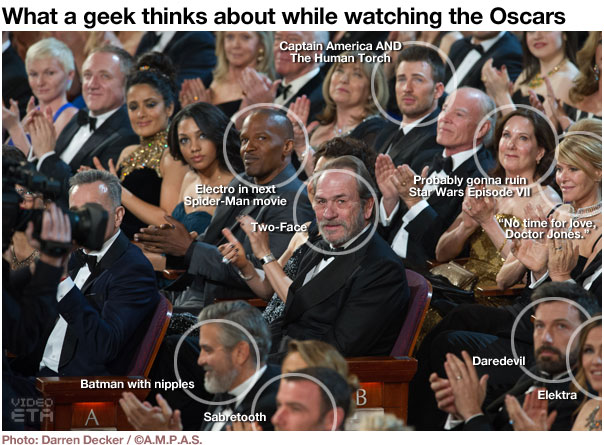 In the end, Life of Pi took home the most statuettes with four and there was a tie for only the sixth time in Oscars history, but the real winners of the night were Ben Affleck and Jennifer Lawrence, who solidified her hold on the most adorable actress in Hollywood. After falling on her way up to the stage, JLaw pulled herself together and loaded up on some liquid courage to give one of the best post-win interviews ever.

The full list of winners and nominees is listed below.