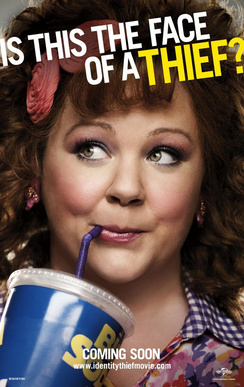 I'm a big fan of the creative process. I like seeing how an idea germinates into something of substance. These two videos show how the movie Identity Thief sprang into being -- and was designed with a fundamental difference.

Identity Thief is the hit comedy starring Jason Bateman and Melissa McCarthy. Both play Sandy Patterson. Well, sort of. Bateman plays a mild-mannered man with that name. McCarthy's character steals the name and identity to go on a wild spending and crime spree. What's Sandy (the guy) to do? Well, go from Denver to Miami to chase down Sandy (the gal).

As you'll see in the videos, Bateman brought the premise to producer Scott Stuber while they were working together on another film. The two have done The Break-Up, The Kingdom, and Couples Retreat.

Give 'em a gander:

I didn't get a chance to see this film in theaters but definitely intend to on DVD. The gender-neutral name Sandy seems to be a running joke. I can't imagine how things might have worked differently had two men occupied the lead roles. It's knowing the little inside info that I enjoy. Bateman saw Bridesmaids and knew he wanted to work with McCarthy. And then it hit him: she could star opposite him in Identity Thief.

This isn't the first time a role intended for a man was switched to fit a woman. The king (or queen as the case may be) of male roles switched to a female is Sigourney Weaver as Ellen Ripley in 1979's Alien. All the crew members were originally written as men but they decided to cast Weaver and the rest is history.

Rather than starring Jodie Foster, Flightplan was planned as a vehicle for Sean Penn. They even kept the character name as "Kyle" when Foster signed on. Angelina Jolie's role in Salt was intended for Tom Cruise. Sometimes they switch gender roles in remakes too. The servant played by John Gielgud in the original Arthur was translated to Helen Mirren for the update with Russell Brand. Website The Frisky has an article with more examples.

Identity Thief comes to DVD and Blu-ray on June 4. Be sure to catch it and imagine how the movie could've been different. Here is the trailer: