Monday Morning Mixer: 'The Purge' cleans up at the box office 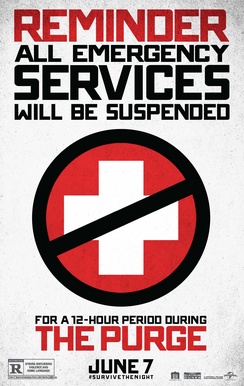 This is the calm before the Man of Steel storm at the box office and while there were plenty of surprises this weekend, I think the biggest one was just how robust the business was ahead of next weekend. Personally, we went and watched Mud this weekend and our showing was packed to maybe 90% capacity.

While relatively strong capacity numbers aren't surprising for a limited run film, what was surprising was the large audiences seemingly taking in the other films as well. On a personal note, the wife and I went out and celebrated our two year anniversary. You can read a bit of a love letter I wrote to her on the occasion.

In fitting fashion, we took in a movie on our date (the aforementioned Mud - Project 52 forthcoming) and it was a great time. Of course, not everyone had such a serene weekend. Sit back and read all about it in this week's MMM.

After last Summer's Battleship fiasco, it seems that Universal can do no wrong this year. First, Fast & Furious 6 is performing as expected and looks to be one of the Summer's biggest box office earners. But, it's the performance from The Purge that will be lining their coffers for months to come.

The two Universal films finished one-two at the box office this weekend with the micro-budgeted The Purge taking top honors with a reported $36.4 million haul. The Ethan Hawke starring horror film follows a futuristic America where they suspend all laws for one 12 hour period each year.

The $3 million price tag on The Purge insures that it will be one of the most profitable films released this Summer amid the many tentpole pictures with budgets just as ginormous. It also pretty much guarantees a sequel and Universal isn't shy about running its successful franchises into the ground *cough*American Pie*cough*.

Horror films typically get run over during the Summer months, but The Purge's performance proves that savvy studios can pick and choose their spots to make a nice profit. Of course, like many horror films before it, The Purge will burn bright fast and fizzle just as quickly. We expect it to only make about $70 million at the box office. Of course, we say "only" in jest as that's about a 2,334% profit.

The weekend's other new offering The Internship reunited Vince Vaughn and Owen Wilson in a film where the two suddenly out-of-work salesmen reinvent themselves as middle-aged interns at Google. While many were hoping that the duo would rekindle their Wedding Crashers magic, The Internship only earned about half of Wedding Crashers' $34 million opening.

Although, since many had projected bad things for the film, it's $18.1 million opening was actually ahead of many prognostications heading into the weekend. It's also the best opening for Vince Vaughn since Couples Retreat opened with $34 million in 2009. For Owen Wilson, it was his strongest live-action opening since 2010's Little Fockers opened with $31 million.

It's hard to predict how strong the legs will be on this one, but I think on the high side, it could crawl as high as $70-75 million.

The other real story from this weekend's is Joss Whedon's debut of Much Ado About Nothing. You might recall that Joss took a break from his directing duties on The Avengers to shoot this modern Shakespeare interpretation over the course of one week.

Well, Much Ado About Nothing finally got its day at the box office and while it didn't bring in Avengers money, it didn't perform too shabbily either. The film debuted with $183,000 from five screens for a pretty good $36,680 per screen average. Much Ado About Nothing will expand in the coming weeks, but don't expect it to make too many waves amid the big tentpole trees of Summer.

It's already past noon, so here are a few quick hitters to shore up the weekend.

Apparently, M. Night Shyamalan ghost wrote She's All That. So, does that mean that Rachael Leigh Cook was really dead the whole time? Whoa!

So, remember that movie Urban Legend? Well, this has nothing to do with that movie, but apparently a Canadian film company is going to dig up a New Mexico landfill in search of the mythical Atari dump. According to folklore, Atari dumped 3.5 million copies of the E.T. video game in said dump after the game flopped spectacularly.

According to the Hollywood Reporter, Brit actress Carey Mulligan is one of the potential thespians who could play former First Lady and Secretary of State Hillary Rodham Clinton in a biopic simply titled "Rodham."

Well, that's all for this week. Until next time, Mix Well.