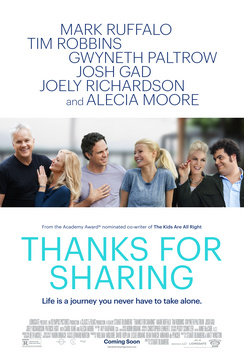 It seems that sex addiction is quickly becoming the "it" addiction in films these days.

A few years ago Michael Fassbender started the recent resurgence in sex addiction with his leading turn in Shame. That films deals with the inner turmoil and social stigma related to the affliction and how an individual addicted to sex struggles to cope in our sex-obsessed world.

Now it's time to have a little fun with sex addiction. OK, that just totally came out wrong.

What I meant to say is that in next month's film Thanks for Sharing, the issue is treated with equal amounts of seriousness and comedy. I think it helps that Mark Ruffalo and Gwyneth Paltrow are at the center of this film and are surrounded by a killer supporting cast including Tim Robbins and Joely Richardson.

The romantic comedy tackles the delicate issue of how a recovery addict handles intimacy when he is finally ready to re-enter the dating scene. I can tell you that I absolutely feel bad for Mark Ruffalo because Gwyneth is smoking in these scenes and would be the worst temptation for any addict, whatever his or her vice may be.

Beyond the main plot though, I'm really curious about bit players Josh Gad and Pink (aka Alecia Moore) who become involved in what might be the oddest romantic pairing of the year. Thanks for Sharing is one of those films that help to bridge the gap between Summer and Awards Season lifting up our IQs a notch while still placating our animal instincts.

Thanks for Sharing will hit theaters on September 20.