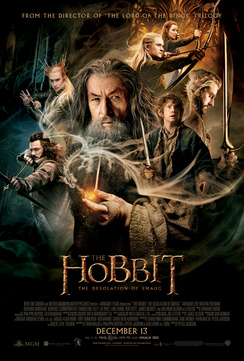 Believe it or not, before I decided to make psychology my study of choice in college, I was an economics major. I know what you're thinking, 'Ew, econ is so boring,' and you're right, it is definitely boring. But there are more than a few concepts from economics that are worth holding onto.

The Law of Diminishing Returns is one of my favorites. Of course, it's also the one that is probably most butchered by seemingly well-intending people who use the phrase. Put simply, it states that the more you add of one factor, the less results you will see. That, there is a ceiling, if you will, to expectations.

Of course, so many factors affect the box office of a film that it's pretty silly having this discussion at all, but I needed to figure out something to start this week's MMM. When it comes to diminishing returns, Peter Jackson is the king. Well, actually, he's more like the king of negative returns, but that's a discussion for a whole other day.

As it relates to today's lesson, how many unnecessary Tolkien sequels does it take for audiences to start pushing back. It seems that this weekend was the start of the end. And we know how much Peter Jackson likes his endings.

It's really hard to say anything negative about a film's opening when it takes in $73.7 million, good enough for fourth best December ever, but I'm going to try. You see, the problem is that The Hobbit: The Desolation of Smaug's opening, while impressive, is a bit less than its predecessor's $84.6 million opening last year.

That all being said, it's not like $300 million is anything sniff at. There are plenty of films out there that would kill to earn that type of box office. I see The Hobbit: The Desolation of Smaug falling just short of that number though, ending up in the $275 million range.

In other box office news, is Tyler Perry slipping? It seems that his audience might have finally gotten their fill of his Madea character. A Madea Christmas opened up in third place with $16 million. That amount was only good enough for the third worst Tyler Perry opening of all time and by far (almost $10 million less) the worst opening for a film featuring Madea.

Personally, I think Tyler Perry will be just fine. Sure, this is a hiccup and it's certainly might be another case of the Law of Diminishing Returns, but even with this opening, the film is sure to make over $50 million at the box office. Given that the estimated budget of the film is $47 million, I'm pretty sure that we will be seeing more Madea movies in the future.

But you never know, film audiences did eventually tire of all those Ernest movies, so anything is possible.

The holidays always seem to be a period hit heaviest with star deaths and this weekend seemed to bear that out with the passing of Peter O'Toole and Oscar winner Joan Fontaine.

It seems that the Weinsteins are back in the Miramax business. Besides this being a karmic correction to a colossal mistake from years back, this does mean that we'll be seeing sequels to Shakespeare in Love and Rounders and TV series based off of Swingers and Good Will Hunting. So maybe the universe was trying to tell us something by keeping these two apart all of these years. Does this excite you?

Don't get me wrong, I'm all for a sequel to Rounders, but the one they are planning doesn't excite me at all. You set the sequel in the world where Matt Damon's Mike McDermott is the big screen version of Chris Moneymaker, the person who ignited the poker explosion and then it's about his blow up to fame and how Worm comes back into his life. Now that's a story that I want to see.

The Alamo Drafthouse, which I find to be just an awesome place to see a film (at least in theory), has compiled yet another "Top 100" list, but I think you'll find this one a bit more interesting. The list is described as being defined "by the space reserved in our hearts" and not critical importance or the usual B.S. that tends to clog these sort of lists. I'll be honest, I was skeptical until I checked out their list and now I just want to grab some brews with them and go through the list. It's a great one, check it out.

Well, that does it for another MMM. It's been a week and since I'm off next Monday, I'm not sure if Tim will pick up the slack for one week or if we'll take a holiday and return after Christmas. Either way, from me, at least, Happy Holidays and until we meet again, Mix Well.