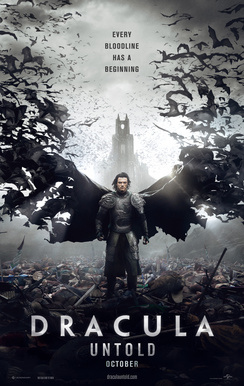 As we amble towards the middle of the month, it's pretty clear that October is still a strong month for the ghouls and the goblins. That's not to say that great films can't still make a dollar or two, but it always seems like mediocre horror films get that Halloween boost right around now.

I think it's pretty safe to assume that Dracula Untold is the latest to benefit from said bounce, but why is that? As we've seen over the years, truly good horror films can thrive outside of the blanket of October. Even in typically "dead" months (no pun intended) like January and February, good horror films can find purchase while other films wither and die.

Is there something innate within us that simply enjoys a good scare? I'm sure those of you in the audience with a more hard science bent will point to adrenaline and endorphins and how the sensation of fear causes some sort of biochemical reactions in our bodies. Sure, all of that is well and good, but honestly I think the real reason is a bit more basic.

Humans are social creatures by nature and while the onset of social media has allowed us to become more social, while paradoxically making us more anonymous, we still crave the acceptance of others. There still is no greater thing in the world than experiencing something special in the presence of others. This shared experience gives each of us something to identify with other people.

Movies are one of the last great bastions where people can interact and connect with others relatively quickly. We saw it a few months ago with Guardians of the Galaxy and we continually see it with each Hollywood blockbuster. It is still the easiest way to connect with someone despite your differences and perhaps horror films more than other genres tap into that primal desire to be social and share your experiences.

My Social Psychology professor used to say that the quickest way to world peace would be an alien invasion and I've always thought that she nailed that one squarely on the head. In a much smaller way, we are able to overcome the issues that divide us, ever so briefly, when we talk about films.

So, let's all get social and talk about this weekend, shall we?

I will certainly say this for Gone Girl, it's not blowing away the competition, but just like the Kansas City Royals, it's winning by stringing together a bunch of singles and doubles. Once again, Gone Girl took the top spot with $26.8 million, just nudging out new-comer Dracula Untold.

Dracula Untold exceeded expectations and played up the Halloween bounce to a nice $23.5 million. The Dracula origin story is one that found quite a few viewers as it seems that horror films will again be highly sought after the next couple of weeks. This bodes well for Ouija and Horns as they also look to get a little help from the holiday.

It seems that Ben Affleck still has the bragging rights in his house. His wife's (Jennifer Garner) new film Alexander and the Terrible, Horrible, No Good, Very Bad Day opened modestly well in third place, but its $19.1 million is still a bit smaller than Gone Girl's second weekend haul.

Tim and I are split on Fifty Shades of Grey. He postulates that it won't be a huge box office hit due to the perceived stigma of watching the film. Much like the success of the book on digital platforms, he reasons that the relative anonymity of digital downloading will make it a wild success on home entertainment. On the flip side, I think that women are going to flock to the theaters in droves to see this film as a great "ladies night" out.

You only have to look as far as the huge success of Magic Mike to see that women are more than willing to go to theaters to see what they want to see. Of course, with Fifty Shades of Grey opening over Valentine's weekend, I do wonder if the romantic holiday will undercut some of their earnings. Or can women convince men to go see it with them in theaters?

This will certainly be something interesting to track as we move into the packed 2015 calendar year.

Well, that's it for this week. I hope you've had a great weekend, but now it's time to move on to the week ahead.

Until next week, Mix Well!