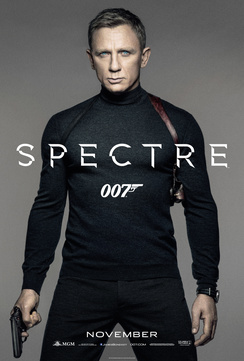 The thing that I've loved the most about the Daniel Craig series of Bond films is the style and class of his version of James Bond. After Sean Connery and Roger Moore left the franchise, it just seemed that James Bond went from being classic to being glitzy. The focus shifted to gadgets and explosions and the dialog and acting really took a back seat to all that action.

Maybe my pessimism on this period of Bond stems from a few minutes that I watched this weekend of Tomorrow Never Dies. That opening sequence is beautifully shot yes, but it also looks more at home in a Michael Bay film than a James Bond flick. But the last few films have really shifted the focus back to character and that certain Je ne sais pas that is the legend surrounding James Bond.

The recently released teaser for Spectre shows that the next film in the highly successful franchise is in line with this new train of thought. While not much is revealed in the trailer, we do get what figures to be one of the main mysteries of the film that puts James Bond on a collision course with his childhood foster brother Franz Oberhauser, played by the brilliant Christoph Waltz.

The really interesting thing is that we hear Waltz' voice at the end, but his face is purposely shrouded in shadow. There's been a lot of speculation ever since the title was revealed that Christoph Waltz would be playing Ernst Stavro Blofeld, the head of Spectre. The shadows are interesting because Blofeld, as portrayed by Donald Pleasence in You Only Live Twice, was easily recognized by his massive facial scar.

So, are they deliberately trolling us with the shadows over Waltz' face or will he actually be playing Blofeld? Time will tell. For now, the trailer is a great teaser and has certainly piqued my interest in the film.