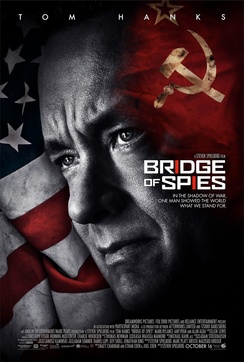 Everyone enjoys BOATS. A BOATS often means a good time.

What's a BOATS? It's a film Based On A True Story, a dramatized retelling of actual events. Some of the most gripping films (Lifetime made-for-TV movies) ever put to celluloid have been BOATS.

A Beautiful Mind, Moneyball, Ray, 127 Hours, All the President's Men, The Blind Side, Apollo 13, GoodFellas, Zodiac, 12 Years a Slave, The Theory of Everything -- all based on a true story. Heck, even Titanic was a BOATS. ;-)

If you're looking for a filmmaker to captain your BOATS, you have to go with Steven Spielberg. He is the master of bringing real stories to the big screen. Schindler's List, Catch Me If You Can, Munich, Amistad, and Lincoln are among his true story greatest hits. This fall's Bridge of Spies looks to be next in this prestigious roster. Take a look at the just-released trailer:

As you can tell it's a Cold War tale starring none other than the great Tom Hanks. This will be the fourth pairing of Hanks and Spielberg as star and director. Saving Private Ryan, The Terminal, and Catch Me If You Can being their previous works. If those two legends weren't enough. The tale was scripted by Joel and Ethan Coen, along with Matt Charman. The Coens only have 5 Academy Award nominations for writing including wins for Fargo and No Country for Old Men.

In addition to these notables is a solid supporting cast. Mark Rylance plays the KGB agent who Hanks' James Donovan defends. Amy Ryan is Donovan's wife and Alan Alda is a partner in his law firm. Rising young actress Eve Hewson co-stars. (You might know her famous father, Bono of U2.) I understand there may be one or two surprise cameos in the film as well.

Given the cachet these principals bring, Bridge of Spies is a natural for Oscar consideration. The film opens in theaters on Oct. 16.