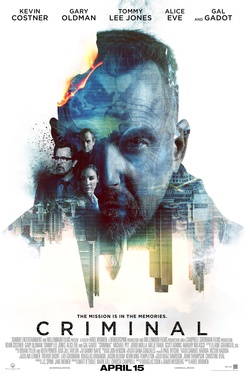 The first thing that you will notice about the film Criminal is the bevy of A-listers in its billing block.

That's what we call packed with talent, and that's in addition to the "blink and you'll miss him" appearance from Ryan Reynolds. You would think that with such an amazing cast, the end result would just be pure cinematic bliss. Well, sometimes the sum of the parts is greater than the whole.

That's not to say that Criminal is not worth a watch because there are many great moments in the film. No, the better caution here would be to go in with low expectations and come away with the satisfaction that you just watched some of our great actors chew the scenery for two hours in what amounts to a glorified remake of Face/Off.

That's not fair, no film should ever have to be compared to Face/Off, but there are plenty of similarities. Ryan Reynolds plays a CIA agent who is gunned down but his brain holds important information that is vital to prevent [insert worst case scenario of the day here]. Enter Tommy Lee Jones and his cutting-edge, read not ready for primetime, brain-swapping technique.

Abracadabra and just like that Ryan Reynolds is in Kevin Costner's head. It's sort of like All of Me without the jokes. As an aside, I'm as big of a fan of Kevin Costner as anyone, but I think if most people had a choice, they would prefer to have their minds inserted into Ryan Reynolds' body. Or maybe, that's just me.

Of course, Kevin Costner is a bad dude on death row, but he's the only readily available guinea pig that meets the brain damage criteria necessary for Tommy Lee Jones' procedure to work. So I suppose it's like The Rock in which a convicted killer is the only hope to save the day.

Naturally, the procedure doesn't work quite as expected or otherwise the film would be over and studios usually don't like to spend this kind of money for this type of cast on a 10-minute movie. Thankfully, the day doesn't repeat ala Source Code, but there is a budding "I'm going to steal your wife" development that you see in Face/Off.

In the end, they boil down all three Taken films for a rather fulfilling resolution that you probably won't see coming.

I jest, but the criticism is real. The biggest problem with Criminal for me is that it feels like a hodge-podge of other, better films wrapped into one single-serve helping. I guess that's good if you like all the ingredients that go into the pie, but for me, I would rather watch something that breaks new ground.

The one thing that stands out more than anything else is Kevin Costner's performance as Jericho. Kevin Costner is known for playing the good guy, but he's anything but that as the movie gets started. I loved Mr. Brooks because it presented Kevin Costner as a bad guy. By going against type, he's able to tread new ground and, as it turns out, he is pretty convincing as a bad guy.

Gary Oldman is also very good as the CIA man in charge of the operation. I don't know if we ever get more information as to what his precise title is, but it's clear that he's in charge of an operation that is quickly going sideways, but his considerable acting chops save his character from becoming just another CIA boss.

By all accounts Gal Gadot is wonderful as Wonder Woman, but here she's a bit pigeon-holed into the weeping helpless wife. I know that she's grieving and coming to grips with the reality she has been thrust into, but one minute she's confronting the killer, Jericho while in the next she's being kidnapped by the bad guys without putting up much of a fight.

The other main criticism that I have with the film is that they spend way too much time on the science behind the procedure. Downloading one person's mind into another's body is so far-fetched that you really should gloss over it as quickly as possible. Instead, they keep bringing Tommy Lee Jones back at every chance they can to offer exposition.

These distractions slow down and take away from the action of the film which is actually pretty good. There are several great chase sequences and shootouts that looked spectacular on the 4K UHD version of the film. Unfortunately, the film trips over its complicated plot to the point where I just had to stop caring about the story and enjoy the moment.

At the end of the day, Criminal has a great cast of actors who shine despite a sub-par script that is constantly holding them back. It's a fun popcorn flick that provides an adequate distraction to all of the craziness around us.