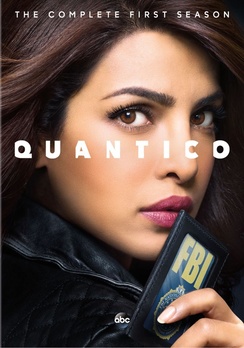 One thing that I've learned now that I'm still a relatively new father is that you no longer own your TV. You see, before kids, my wife and I used to watch a lot of TV shows, but after the kids came, we quickly learned that they ruled the TV, among other things.

So, these last five years or so, we have become very picky when it comes to taking on new shows. Often, we will watch one or two episodes and decide whether the new show warrants further watching or not. Of course, we have been burned once or twice when we get hooked on a new show and the network cans it.

Last Fall, one of the shows that we were most looking forward to checking out was Quantico, but like many new shows, we were skeptical about its long-term prospects. Thankfully, we stuck with it and ABC didn't cancel it and Quantico quickly became a weekly ritual for us.

It's hard to review a series like this because the best thing about the series is the discovery of its intricate twists and turns. I will not spoil the first season, but I will simply say that the show's biggest strength is its ability to lead and often mislead the audience while still leaving just enough crumbs for an astute viewer to pick up on.

The series starts with FBI agent Alex Parrish waking up in the middle of an aftermath of a suspected terrorist attack that will resonate with most viewers as something akin to the heinous 9/11 attacks. The question quickly becomes whether this FBI agent, played to perfection by Priyanka Chopra, is a victim or mastermind of this attack on New York City's Grand Central Station.

Whodunnits are very popular with TV entertainment these days whether it's The Night Of or ABC's other successful whodunnit How to Get Away with Murder, but the unique storytelling structure allows Quantico to remain fresh while still maintaining suspense in both the present and the past. With plenty of motives and intrigue to go around, Quantico does a great job of keeping the identity of the protagonist a secret for as long as possible.

With this review, I was able to go back and watch the series from the pilot and notice the breadcrumbs that I missed the first time. It was this second viewing that truly elevated Quantico to a new level of appreciation. Often, Lost felt that as though the creators were making it up as they went along, but it is clear that the people responsible for Quantico had a plan from day one and it gives me hope that they will be able to maintain that high level of execution for season two.

Of course, that begs the question, will they simply introduce a new class at Quantico or follow the aftermath of the events from season one? Either way, I think the series has very interesting options to explore in coming seasons.

As mentioned earlier, the real standout from Quantico is Priyanka Chopra and her People's Choice Award for Favorite Actress in a New TV Series is well deserved. She is an accomplished Bollywood star, but this is her first mainstream role for American audiences and it's safe to say that she'll be a regular star in many film and TV roles in the coming years.

That is another high mark for Quantico. The FBI is often mistakenly thought of as a country club organization for older white men, but the diversity of this cast does wonders to update this outdated stereotype. Of course, the show also sheds light into the complexities of the FBI and the very real issues that it faces in a post-9/11 world.

The real selling point of the DVD/Blu-ray of Quantico: Season One though is the plethora of special features that comes with the episodes. These days, most TV series only come with the episodes and rarely do they include anything else. But, Quantico: Season One has a fun featurette that interviews the cast and reveals how their own theories and ideas changed over the course of the season as they got new scripts. The set also includes deleted scenes and bloopers which provide the buyer with a real sense of value. If you're a fan of the series, I recommend that you pick up the DVD or Blu-ray set and rediscover all of the little twists and turns and catch all the ones that you missed the first time.