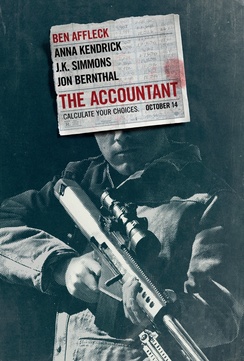 For me, there is no better season than the start of the NHL season. Of course, that probably has to do with my father's Canadian heritage more than anything else, but there's just something about the start of October that is magical.

The weather cools down (usually) and leaves begin to fall. The days get shorter, but I'm a night owl, so that works out for me.

There's also an odd period at the box office where the later Summer blockbusters are still filtering out of theaters, but the family-friendly films and award contenders haven't quite gotten started. Traditionally, Hollywood has filled this month with every single horror film that it can get its hands on, times have changed.

Horror films have down well in other non-traditional times such as January and February and people aren't rushing out to see nothing but horror films in the spookiest month of the year. No, it seems that action films such as this weekend's The Accountant and last year's The Martian are seeing more traction.

This is good for Hollywood, which always seems to have a glut of these type of films, but it's sort of sad in a way that our odd little October is going mainstream. Oh well, I guess it's just a sign of the times, for better or worse. This coming week should be interesting when another action film Jack Reacher: Never Go Back goes head-to-head with a couple of more holiday-themed films.

But, we'll save that discussion for next week. Let's check out what happened this past weekend.

The big new movie this weekend was the Ben Affleck-starrer The Accountant. It's sort of his Jason Bourne movie, but with a twist. That twist is probably what kept it from being considered for release during the traditional Summer months. The trailers made it out to be more complicated than a straight-ahead shooter, but it seems the studio opted for a more traditional cut when it was all said and done.

That's too bad, because the parts that intrigued me the most from the trailers were the bits that dealt with his amazing abilities that extended beyond killing people. Well, that and Anna Kendrick, who can do no wrong in my book.

As a popcorn movie, it's apparently pretty effective and its opening number of nearly $25 million reflects that. That performance is much better than estimates had pegged the film going into the weekend and is more than double the debut from another newcomer.

Kevin Hart is as hot as they come in comedy circles, but Universal has to be disappointed by the performance of his latest comedy concert film. Despite high expectations, it opened up with only $12 million and looks to be the first chink in his teflon armor.

The Accountant should perform well despite heavy competition in the coming weeks. I wouldn't be surprised to see it end with over $85 million in its coffers. Kevin Hart: What Now?, on the other hand, will be trying to answer that question when it sputters out close to $30 million.

The other new wide release, Max Steel, was as much of a disappointment as expected. The studio didn't really promote it much ahead of its release, so it seemed that its doom was to be expected. And yet, the $2.2 million opening is one of the worst ever wide-release openings.

Max Steel probably won't limp to $10 million, which is one of the more odd stories this year from what was once considered a film with great potential.