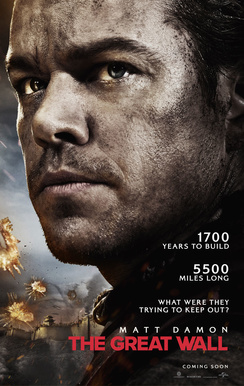 President's weekend is always an interesting one at the box office. On the one hand, it falls right in prime awards season territory, so you would expect a bit of a bump to those award-contending films. On the other hand, kids are out of school today, so that bodes well for family-friendly fare.

So, how did it play out this year? A little bit of both, actually.

The real story though is that the holiday weekend is looking to come in at about half of last year's number. Of course, 2016 was buoyed by the breakout hit Deadpool, which fits neither the family-friendly or awards-contending storylines. I'm actually surprised that Fox didn't try to mimic Deadpool's path to success with Logan, considering that both films speak to similar audiences and are rated R.

Instead, Fox opted to play it a bit safer with Logan, opening it next month, a bit closer to the traditional Summer season. If Logan doesn't perform up to expectations, I think Fox is going to playing the "What If?" game a lot in the coming months.

Of course, the review embargo has been listed on Logan and it appears that critics pretty much universally loved it, so I'm pretty sure Fox is going to be happy regardless. Back on point though, are studios leaving box office dollars out there by not spreading out their bigger titles?

It's a discussion that we will continue to have over and over again, because studios seem entrenched in their traditions. I guess we will be the ones left playing the "What If?" game.

Our whole family ventured out to the theater this weekend, so I suppose we are partly to blame for The LEGO Batman Movie's repeat win at the box office. No, we didn't contribute the entire $34 million to its coffers, but it sure felt like it. The cost of taking a family of four to the theaters is one that we will tackle another day though, because it has gotten ridiculous.

The animated family film has earned $98 million and change thus far and should top $100 million by the time you read this. It's pretty clear that this film is not going to fill the big shoes of The Lego Movie, but still, its performance is pretty impressive all things considered.

For me, I enjoyed the film because it's one of those animated films that work on two levels. There's a bunch of stuff for kids and then there's plenty of in-jokes for the adults that are forced to sit through a children's movie. They poked plenty of fun and every incarnation of Batman and even slipped in a Quentin Tarantino reference in there.

Was it the best animated film that I have ever seen? No, but it's a very entertaining film that I suspect will hold up to repeat viewings. When you have two toddlers in the house, this is usually the most important component of any animated film.

Matt Damon plays a European mercenary who battles a monster in The Great Wall. Yes, the film and Matt Damon are receiving a bit of flack for the odd casting choice, but it seems to work. The film made a ton of money in China already and while the $18 million opening isn't spectacular, it is higher (by a good bit) than even the rosiest of projections going into the weekend.

I have no idea how the film will hold throughout its run, but the very mixed reviews aren't all that encouraging. I could see it running out of steam around $60 million or so. For a film that cost $150 million to make that would normally be catastrophic, but as I mentioned, the film is already turning a profit thanks to its impressive numbers in China, so...

Fist Fight proves that Charlie Day might not be ready to headline his own films yet. That's sad, because he truly is a funny actor. Of course, he wasn't really top-lining this comedy by himself. Ice Cube plays his foil and he certainly has plenty of experience of carrying a film, so what went wrong?

The film opened with $12 million which is a bit under expectations, but I think the real issue was the film's marketing. To me, they never did much to expand the plot beyond the simplest concept of a teacher fight. While that idea is inherently funny on its own, I'm not sure a lot of people are willing to commit 90 minutes to it. It will most likely find its audience on home entertainment in a few months.

A Cure for Wellness completes the triad of new releases last weekend, but it barely made a blip on the collective consciousness of the box office. By earning $4.2 million, it snuck into the top ten, barely, but will otherwise be forgotten by this time next week. It will likely end up right at $10 million, which is a testament to its marketing strategy that seemed to be all over the place.

I couldn't get a handle on exactly what this film was trying to accomplish, so I'm sure the average movie-goer probably figured it wasn't worth the time and effort. Speaking of time, it seems that the biggest issue critics had with the film was its overly long running time. Apparently, the film has some intriguing elements, but they overstay their welcome by a long shot.

First up, there's news that Kev has tapped to write, executive produce and showrun a Sam and Twitch TV series for BBC America. The series is a spinoff of Spawn and is said to be a criminal procedural ripe with gallows humor but in a modern, contemporary way.

Get teady for the Jay & Silent Bob of cops, SAM & TWITCH! Thanks @BBCAMERICA & @Todd_McFarlane! Can't wait to go to Hell & back with y'all! https://t.co/kVnlMLok1y

That sounds right up his alley to be honest and I can't wait to see it. Previously, Kevin was attached to bring a Buckaroo Banzai sequel to TV, but rights issues has stalled that project for now. On the film front, the writer/director is gearing up to tread back into familiar territory.

My next flick will star @JayMewes and is entitled JAY AND SILENT BOB REBOOT. All info thus far is here: https://t.co/SxqdZHIhHk pic.twitter.com/ThvI7G6skY

You can click through and read all the details for yourself, but he's hoping to shoot Jay and Silent Bob Reboot later this year, which would target a release in 2018.

Monday... the hunt is on. pic.twitter.com/4tScRCnhGA

He is starting to film The Predator today and he took to the social media network to tweet a partial cast picture.