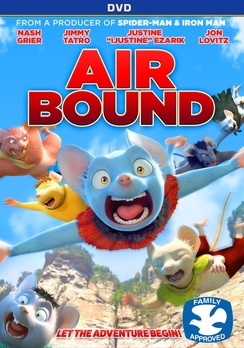 As someone with two young toddlers in the house, I have unwittingly become something of an animated film aficionado. Don't get me wrong, I have always had a love of all things Disney, Pixar and the like, but there's only so many times that anyone take hearing "Let it Go."

So, I am always on the lookout for good animated fare that will resonate with my kids and not make me want to take a long walk off a short pier. Trust me, this is a lot harder than it sounds. There is so much bad animated films out there, that I'm sort of surprised that it continues to be released in such massive numbers, but hey, different strokes for different folks as they say.

When I brought Air Bound home for review, I was a bit skeptical. Don't get me wrong, the fun, lenticular art work was interesting and my daughter was instantly transfixed by the changing art. I did a bit of digging on the film, so as not to accidentally expose my kids to a more mature movie in animated clothing, ala Nerdland.

Funny story, my father-in-law actually spun up Nerdland for the kids one night. Thankfully, I got home just in time to prevent some serious psychological damage to my kids, but lesson learned.

The first potential red flag with Air Bound was that it was a recycled international film. This has been happening a lot more recently. Basically, animated films that were produced for one audience are being dubbed with English-speaking actors and voila, a whole new movie is born. Air Bound was originally titled Gamba: Ganba to Nakamatachi when it was released in Japan in 2015.

This all seemed harmless enough, so it was family approved. Of course, the Dove seal of Family Approval didn't hurt either. And besides, Jon Lovitz plays an animated weasel, so I couldn't possibly resist watching art imitate life so closely.

What transpired was one of those rare hour and a half periods in which my kids were completely transfixed by what they saw on the screen. The fact that this wasn't a widely advertised film intrigued them as they were constantly surprised by the twists and turns.

The film is well made and the animation is on par with any other direct-to-video film that they have seen many times. What separates Air Bound though from the rest is that it actually manages to bring several new things to the screen, despite sharing several storylines with similar fare. Let's face it, there's only so many ways you can present the hero story in animated form without repeating yourself.

Better yet, Air Bound re-introduced me to the concept of mice as animated leads. Throughout the film, I kept reminiscing about The Secret of NIMH, An American Tail and The Rescuers. As soon as the film was over, I took advantage of my kids' enjoyment of the film to introduce them to these other films of my youth.

As a result, we have spent the last week or so going back and discovering long-forgotten gems like these. So, in that regard, Air Bound was a huge success for us. On its own, it is the sort of high quality entertainment that all parents want to present their children, but the real power of it lies in its ability to connect the present with the past through the litany of rodent protagonists.