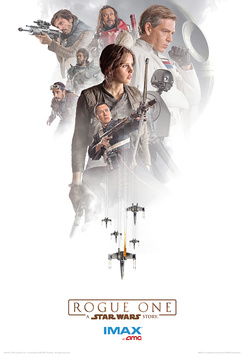 The last month was anything but boring when it came to Star Wars news, but consider this: we still haven't seen a single bit of footage from The Last Jedi. While it seems that Disney is departing from the strategy it established on The Force Awakens, you have to remember that they now have other Star Wars films to promote.

Honestly, I was hoping to see the first trailer attached to Rogue One, but it actually makes more sense for Disney to hold back. We didn't see anything for Rogue One until after The Force Awakens had its run. So, from here on out, I think it's safe to say that Disney isn't going to undercut its own Star Wars film with the next great thing.

If you're expecting March to be a month filled with news, you might want to curb your enthusiasm. With Star Wars Celebration taking place next month, it's probably a good bet that Disney will be on lockdown until then. Also, if you're just longing to see the first frames from The Last Jedi, then I'm willing to bet that you will be rewarded in a little over a month.

Thankfully, the last month was full of plenty of Star Wars news. Let's get started, shall we?

After his solo attempt failed, he turned to Dame Judi Dench to try and pry some answers out of her.

When that failed, Josh brought in the heavy hitters.

And so it ends. #DaisyRidley #StarWars Give us the truth pic.twitter.com/o4d429ydzL

Next, we learned that starting with next year's Han Solo film, actor Joonas Suotamo will take the reins of playing Chewbacca full-time from Peter Mayhew.

Weâre coming to Orlando for a @StarWars Celebration panel on April 14th, and I cannot wait. See you there! https://t.co/dXUgGJ1BwF

Well, that's it for now. Until next month, may the Force be with you.