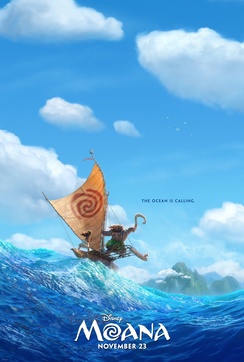 When you have a library of films that includes Cinderella, Snow White and The Lion King, it's hard to use words like comeback and resurgence, but Disney hasn't always enjoyed the widespread success that it does today. Nope, in fact, for the greater part of my childhood (late '70s, early '80s) Disney wasn't really known for their animated films anymore.

With the rise in prominence of Pixar and Illumination, Disney was again falling behind its peers in the 2000s. In typical Disney fashion, they went out and bought Pixar, so that helped. The runaway success of Marvel and the acquisition of the Star Wars franchise will ensure that Disney remains successful for many years to come, but Disney will always be synonymous with animation, so to see that arm of the company fall by the wayside was a bit discouraging.

Disney animation started its trek back to respectability in 2010 with Tangled, but it was Frozen in 2013 that cemented its status back on top of the animation world. Last year, they brought two highly successful films to the big screen in Zootopia and Moana.

With Moana, Disney's secret to its success was its willingness to reach back and touch upon those stories from its heyday. Moana feels as much a Disney princess as any of the traditional Disney princesses, even if they poke fun at the concept in the movie itself.

The one Disney film that I would compare Moana to is Hercules. Of course here, it's the demi-god that is forced to play second fiddle to Moana. But yet, there are very similar themes in both films and it's good to see the universal stories still ring true no matter the setting.

Don't worry, though, there's much more to Moana than simply rehashing older films. Moana is the latest in a new breed of strong female protagonists that no longer need the assistance of Prince Charming to reach their goals. Sure, in Moana, Maui, voiced by The Rock, is able to impart his wisdom of sailing and some third act help, but Moana is the true star here and she's able to persevere through many obstacles.

Perhaps the best review I can give Moana is that my kids have now watched it no less than four times in the week that I have had the film. Thankfully, the film holds up to repeat viewings. Also, the Blu-ray combo pack contains a plethora of bonus goodies that will hold over even the most devout Moana lover for many hours.

I do have to take a minute and mention the scene-stealing performance from Jermaine Clement as Tamatoa, the bling-obsessed crab with easily the most fun musical number in the film. He's great and you really need to watch through the credits to get his hilarious post-credits stinger.

Speaking of music, I would be remiss if I didn't mention the contributions made by Hamilton stud Lin-Manuel Miranda. You can certainly hear his influence in many of the musical numbers. He brings his unique voice to the film and it's a fresh take on a classic story. I hope that he continues to work future Disney projects.