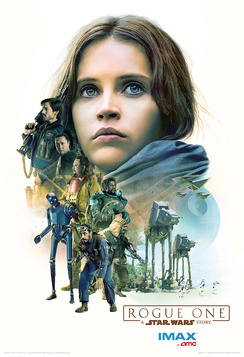 It's technically no longer the 4th, but as they say, it's close enough for government work, right? Sorry about the one-day delay but part of playing catch up from vacation involves having to prioritize and make sacrifices. So, it seems that in the grand scheme of things, getting our little Star Wars story out on time isn't as important as we all know that it is.

But hey, it's only one day and I'd love to be able to say that the delay allowed me to cram even more information into this update, but the reality is that we are in the calm before the storm. With next week's Star Wars Celebration in Orlando on the horizon, there has been a veritable dearth of Star Wars information.

I did toy with the idea of delaying this update even longer and including all of the Star Wars Celebration news, but I'll simply include them in the following Monday Mixer or May's Star Wars update. For now, I'll humbly submit this modest update.

But keep your eyes peeled, because I fully expect that we'll get our first trailer for The Last Jedi next week. That nugget will dictate its own stand alone story altogether.

Of course, I like to say never say never.

Of course, they are. I am convinced that we will see a new Star Wars movie each year from here until the end of time.

Given that this year is the 40th anniversary of the release of the original Star Wars, they are sure to have plenty of cool tricks up their sleeves. As I mentioned, we are almost guaranteed to get the first trailer for The Last Jedi. We will post updates here and on our social media feeds.

Until next month, May the Force be with you.