Monday Mixer: 'Fate of the Furious' sets a new record 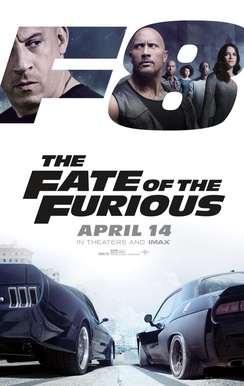 There's one aspect of the box office that we don't really talk much about, but is probably something that we should at least acknowledge. Given that our site's main focus is the home entertainment market in the United States, we have mostly focused on the domestic box office.

What this means for us is that studios are now becoming even more cognizant of this fact and are tailoring their releases to maximize their foreign revenues. That's why, in part, why we still get a deluge of big action sequels despite their diminishing returns at the U.S. box office.

This discussion is extra relevant today because The Fate of the Furious did something this weekend that not even Star Wars has been able to do. Let's dig a bit deeper, shall we?

The Fate of the Furious officially became the second film to top the $100 million opening mark this year - barely. On the one hand, this is a great showing, but on the other, it does represent almost a $50 million drop from Furious 7's opening. What is interesting, though, is the impressive international numbers that the film enjoyed.

More significantly, though, is that this weekend's worldwide opening for The Fate of the Furious is about $135 million more than the worldwide opening for Furious 7. Now, you can see why studios have become increasingly more astute when it comes to listening to the international markets. It's aslo no surprise that their Fast and Furious franchise led by two international action superstars such as Dwayne Johnson and Vin Diesel is able to put up such impressive worldwide numbers.

What will be interesting is to see how the film performs over the next few weeks. In 2015, Easter was earlier and the business for Furious 7 dried up pretty quickly. Given the later Easter this year, the increased competition in the weeks ahead does not bode well for the film's long-term prospects. At this point, I would be shocked if it's able to break the $300 million barrier.

Still, the international markets should remain strong and buoy The Fate of the Furious well past $1.5 billion overall. With surging international dollars for this franchise, you can bet that unless something unforeseen happens, there will be many more Fast and Furious films after the already announced two more films.