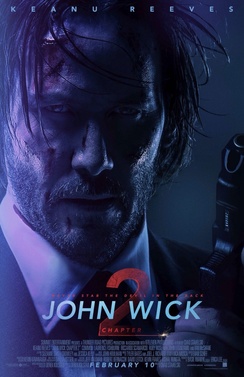 Let's face it, Keanu Reeves doesn't have much luck when it comes to sequels to his massive action films. The Matrix was iconic. The two sequels? Not so much. So, after finally seeing John Wick one drunken night on Netflix, I was desperately waiting for its sequel.

Well, desperately waiting and legitimately petrified that they would find a way to mess it up so much that it would ruin the original film for me forever.

Thankfully, that wasn't the case.

Where I did mess up (sort of) is that I was so excited about John Wick: Chapter Two that I convinced my wife to watch the 4K UHD version of John Wick with me. She had never seen it but The Boondock Saints is in her all-time top five movies, so that means a couple of things. First, I totally married a keeper and second, she was going to love John Wick.

She did, but the "messing up" part is that she wanted me to wait and watch John Wick: Chapter Two with her. Talk about being doused with a bucket of cold water. With two young kids and crazy schedules, the reality is that we wouldn't get a chance to watch the film together until its home entertainment release. Could I wait four more months? I doubt it, but somehow I did. When the notice came about the availability of review copies, it was like Christmas in May.

Last week, we got the perfect window to watch John Wick: Chapter Two when the grandparents volunteered to take the kids out of town for a couple of days. We settled in and awaited the bloodshed. We didn't have to wait long.

I knew that I wasn't going to be let down when I was surprised last week with a special delivery from John Wick himself. Inside the package was a single #2 pencil, but thankfully it was free from bloodstains. For those that haven't seen any of the John Wick films yet, why not? What are you waiting for? Go, watch them now and then come back. Anyhow, you may have forgotten in all of the carnage of the first film, but Keanu makes short work of three killers with a single pencil. It was a memorable scene and this gift was the sign that ensured that this sequel would not go the way of The Matrix.

Although, at least one person thinks that John Wick: Chapter Two is a secret sequel The Matrix. You can read his theory here and while it's an interesting read, I think it's more of an homage than a secret sequel, but at this point, nothing would surprise me.

John Wick: Chapter Two picks up quite literally where the first film left off (OK, maybe a couple of days later), but it's quite clear that this film intends to match, if not succeed, its predecessor in both body count and style. There's no rest for the wicked and we are quickly swept up in the world that we only hinted at in the first film. It becomes pretty clear early on that this expanded assassin universe is going to be the background for a couple more films so they spend their time fleshing it out.

Not only does this attention to detail help to augment the various bloody endings in the film, but it provides a good base to bring events to a head in the third film (or beyond). In fact, the expanded universe even sheds some light on the first film and provides some backstory to a couple of the key plot points from John Wick.

At the end of the day, if you enjoyed John Wick, then you will love John Wick: Chapter Two. You can certainly tell that the filmmakers made sure that the second film not only lived up to the amazing experience of the first film but also told its own story that further added to the legend that is John Wick.

I was fortunate to receive a 4K UHD Blu-ray version to review and all of the amazing qualities of the 4K UHD version of the first film are on full display on this disc as well. The world of John Wick is one that is dark and shrouded in shadows. The High Dynamic Range (HDR) of color on the 4K UHD version really allows the filmmakers to recreate their stylistic vision effectively at home.

One of the biggest selling points for me when it comes to physical goods is the depth and breadth of bonus features. John Wick: Chapter Two content is literally spilling over the edge of the disc with deleted scenes and no less than nine featurettes. Much like the bonus features included on the disc of the first film, everything seemed to be an extension of the film. While I love bonus features, it's not often that I watch them immediately after watching the film.

Usually, I give the film some time to breathe before I dive back in for the extra goodies, but this wasn't the case with John Wick: Chapter Two. I wanted to consume as much as I could as quickly as I could. The result was an epic viewing party that went into the early morning hours, but it was so worth it.