Review: 'Their Finest' is a most worthy effort 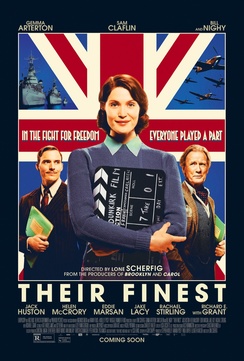 I know that I'm late to the party on Gemma Arterton, but if there's one film that proves that I should have noticed her sooner, it is Their Finest. There isn't any one thing about her performance that stands out, but rather the fact that she is able to carry the weight of a rather predictable plot and still make it enjoyable to watch is, in itself, amazing.

The film is set in London during the early parts of World War II when the Germans are ramping up their efforts to blitz London. Foreshadowing later propaganda films from Hollywood, the British Ministry of Information decide to create morale-boosting films to help take British minds off of the real horrors of war that confronted them every day.

Enter Gemma Arterton's Catrin who plays the role of Rosie the Riveter as a screenwriter enlisted to help shape the plot that centers on the Dunkirk evacuation from earlier in the war. Naturally, the "married" Catrin finds herself in the middle of boys club where she and fellow writer Buckley (played by Sam Claflin) develop a friction that everyone knows will develop into a burning romance. Add in a cantankerous Bill Nighy as an aging thespian and the film follows an enjoyable, if somewhat predictable, course.

As you can see above, the highlight of the film was the superb performances turned in by the top-notch cast. In particular, Bill Nighy shines and my only wish was to see him pop up in more scenes. While I was late to Gemma Arterton, I was early on the Sam Claflin bandwagon, so I'm pleased to see him adding another fine performance to his resumÃ©.

I'm also in love with this period and its effect on filmmaking. While we have seen the Hollywood side of things in farces such as Hail, Caesar!, it's not often that we get a peek to the goings-on from across the pond during this period. Their Finest toes a delicate balance between the whimsy and the real weight of the war ongoing around them. In fact, as I was watching the film, I was a bit perturbed about the light-heartedness and predictability of the film, but a right turn in the third act completely changed my mind.

It's not often that films are able to capture the fragility of the human spirit while still presenting the reality of war in a way that is truly balanced, but Their Finest does an admirable job. It's a film that will resonate with you long after the credits finish.

Their Finest is now available on DVD and Blu-ray.