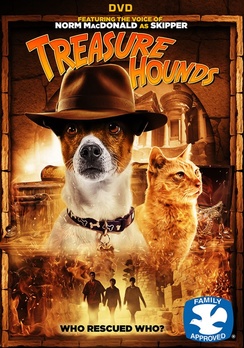 There is nothing inherently wrong with Treasure Hounds per se, but as I watched it with my kids, I yearned to show them the better films that this film pays homage to. My kids are probably still a little young to watch The Goonies, Home Alone or Raiders of the Lost Ark, but Treasure Hounds was an age-appropriate substitute.

And they loved it.

My kids found the talking dog ridiculous (remind me to show them The Shaggy Dog some day) and all of the physical comedy notes resounded with loud bellows of laughter from my children. I'm sure they will love Kevin McAllister when he enacts his own version of pranks on the Wet Bandits when we sit down and watch Home Alone in the coming years.

My only concern is will their enjoyment of the above-mentioned classics be diminished now that they have seen Treasure Hounds? Or will they simply see Treasure Hounds as the homage that it hopes to be for older viewers? Only time will tell. In the meantime, they were riveted by Treasure Hounds and that bodes well as they get older that they will have many of the same reactions as I did to these older films from my childhood.

Don't get me wrong, I could listen to Norm MacDonald voice a telephone book and laugh my ass off, but his dog character is the only one in the film that even a sniff of possessing more than two dimensions. You've got the cardboard cutout goth, the bungling thieves with unnecessary foreign accents and a pretty love interest for the much too young to think about love protagonist.

Character development is the one aspect that stands apart from the classics above. There's a reason that those films have achieved their well-deserved acclaim and that's because they actually developed their characters. In Treasure Hounds, the filmmakers seem more interested to get to the next physical comedy or quick witticism from Norm MacDonald's talking dog. This technique works for the under 10 set but is rather tiresome for anyone who just wants a well-developed story.

All in all, the film plays well for its intended audience and I suppose that's all that matters. But with the advent of smart animated films that can entertain and keep the attention of adults, I was hoping for something more.