When I was just a wee lad in the 1980s, the two biggest names in Hollywood action films were Sylvester Stallone and Arnold Schwarzenegger. We all dreamed that one day these two action heroes would team up to save the world from an unspeakable atrocity.

In 2010, we sort of got that in The Expendables, but Arnold's role was reduced to basically a glorified cameo and we were left wanting. Not from the film because The Expendables was a fine movie, but we still wanted to see Sly and Arnold together on the big screen as the two lead actors.

Enter 2013's Escape Plan and it seemed that our long unanswered prayers were granted, but the initial box office response was tepid. Perhaps it was due to the lingering overkill from The Expendables or simply the ages of our beloved action heroes, but some audiences were not as interested in seeing Rambo and the Terminator blow up the silver screen.

I, however, was not one of those people and I was as enthusiastic about seeing this dream team up as I had ever been. The Expendables only served to wet my whistle and I can attest that the wait was worth it for the most part.

Escape Plan follows Sylvester Stallone as Ray Breslin, a security expert that specializes in making sure that prisons truly are as impenetrable as they claim to be. Ray is approached and offered a huge sum of money to take one last job to break out of a high-tech facility called "The Tomb." It claims to be escape proof and when Ray is double-crossed, he has to team up with Arnold Schwarzenegger's Emil Rottmayer to manufacture their escape.

I found that in re-watching the film all these years later, my initial enjoyment of the film has not waned. I think the biggest critique of the film is that people were expecting their 60-year-old action heroes to have the same non-stop action stamina of their youths. Instead, Escape Plan plays more like a suspense thriller ala the TV series Prison Break than Commando.

The slower pace allows the action stars to work on their acting chops which Stallone seems to have cultivated much better than Schwarzenegger. Likewise, Schwarzenegger seems to relish the action sequences more, so it's a combination that works when you accept that this is as close to the matchup of these icons in their prime that we will ever get.

So, why did Lionsgate choose to release the 4K UHD Blu-ray now? Drafting, of course. They have the direct-to-video sequel Escape Plan 2: Hades coming to home entertainment on June 29 and have perfectly timed this release to take advantage of the upcoming sequel. So, if you have never seen the original film, or want to simply revisit it, the 4K UHD Blu-ray is a surprisingly economical way to do with a very friendly price.

The Dolby Vision 4K transfer is spectacularly done. The added HDR really makes the color pop off the screen. They left just enough film grain in the picture to give the movie the gritty appearance that the filmmakers almost assuredly aimed for in the prison sequences. Escape Plan has never looked better and the higher resolution really allows you to see the age on our action heroes. In a way, this transfer helps to break the dissolution that these aren't the same action heroes that we remember in their prime. Because of this, the film actually works better.

The Dolby Atmos soundtrack is a nice perk that several studios skimp on with their catalog 4K UHD releases. Escape Plan has several action sequences and the sounds of the various prison machinations become a character of isolation that helps to set the tone of the film. Now, the locks activating and the cell doors closing have the imposing trademarks that the filmmakers intended. The one flaw that I did notice in the Dolby Atmos track was that it seemed that the dialog was low in certain places. I didn't find it to be too distracting, but it was noticeable during a couple action sequences.

What I did find lacking was the lack of any new special features. With the sequel coming out in a few weeks, I expected to at least find the trailer for Escape Plan 2: Hades on the discs, but alas there was no mention of the upcoming film anywhere. Also, the special features that are on the 4K UHD Blu-ray were simply the previously available ones on the older Blu-ray. Their inclusion on the 4K UHD disc was curious given that most true 4K transfers use up all of the available space on the disc.

Ultimately, I enjoyed watching Escape Plan again, so the film does hold up well to the test of time (even though it has only been five years). If you were put off by the box office performance or so-so reviews, then I would recommend checking it out now. Escape Plan 2: Hades brings back Sylvester Stallone's Ray Breslin and introduces a new character played by David Bautista. Unfortunately, Arnold Schwarzenegger is not in the sequel, although given the franchise's reliance on drama and suspense over action, that's probably for the best. 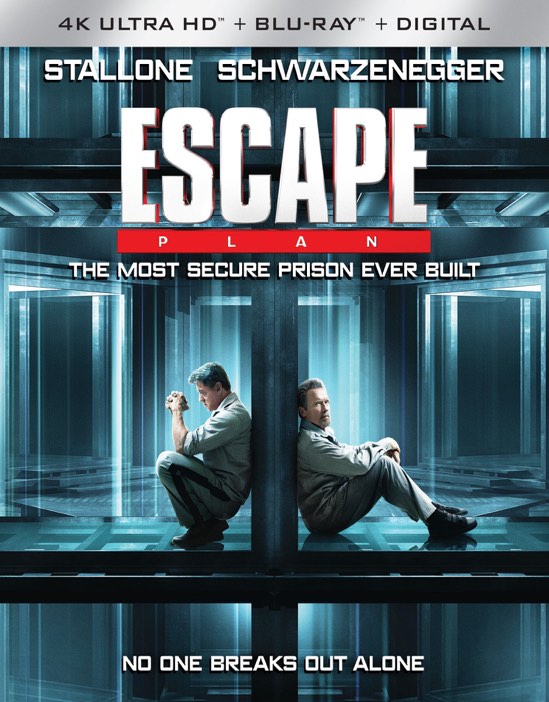