Review: 'Counterpart' is the must-see TV series you aren't watching

Let's face it, we live in a wonderful world. Gone are the days of four channels on the TV and having to get up off the couch to change the channel. No kids, really, go look it up, we actually had to get up and turn the dial to change channels back in the day. Get off my lawn!

OK, so it's been a while since we lived in the reality of only have four options for entertainment, but the onset of the digital delivery age has only expanded our options even more. Now, it's not just network TV vs. Cable TV, but you have Netflix and Hulu and Amazon vying for your eyeballs. It's actually a bit dizzying when you think about it. And I haven't even started to discuss digital offerings from established networks like CBS All Access that has content native and only available on that platform.

If your head is spinning like mine, don't worry, that's where physical media comes in to help you sort it all out. Some claim that by cutting the cord, you will save money and that might be, but once you start adding all of the ala cart services that you want, the bills tend to even out. But, you can't possibly subscribe to them all and you don't want to miss the big hits that everyone is talking about. That's where DVDs and Blu-rays step in to help you out.

You don't have to subscribe to HBO to watch Game of Thrones or Westworld. You don't have to wade through all of the Netflix original clutter to enjoy Stranger Things (although that one is currently a Target exclusive). And finally, you don't have to try and figure out what Starz even is to enjoy Counterpart.

What's that? You haven't heard of Counterpart? That's a shame because it is a pretty spectacular series that you really don't want to fall too far behind on. J.K. Simmons plays a hapless cog in a United Nations spy agency located in Berlin. One day, he comes face to face with his exact doppelganger and learns that his agency is in charge of protecting a door to a parallel dimension.

Think The Americans meets Fringe. The series is set in present-day Berlin, but it has a real height of the Cold War feel to it that is only augmented by its international locale. If you love John Le CarrÃ© spy thrillers, then this is the TV series that you have been waiting your entire life for.

Beyond the espionage and violence (of which there is plenty), there is the man at the heart of the series, J.K. Simmons. He plays two very different Howards that share many of the same experiences, but have each diverted into their own unique individual. The one Howard starts the series as meek and reserved, while the other Howard is decidedly more of a badass.

The nature of the series allows them to play with so many fun themes such as identity, fate and determinism in such a way that pleases the audience. Beyond that, it really makes you think "what if?" and that is the whole point of the series thus far.

J.K. Simmons is amazing and that the filming techniques used to get him to appear on-screen with himself are revolutionary. Gone are the days of shoddy split screen filmmaking, Counterpart makes it feel as though they actually J.K. Simmons and made him into a complete special forces badass. Being able to evaluate the two Howards next to one another is an amazing study in character and one that will only elevate J.K. Simmons' legendary status to a whole new level.

Unlike some of its sci-fi predecessors, Counterpart works by making it simple. Sure, they have exposition as needed, but they don't feel the need to get buried in the science so much as to simply explore this world. For Season One, they made the wise decision to limit the scope of the show a bit and allow it to unfold in a bit of a slow burn. This allows the audience's mind to acclimate to this new world more easily and it's greatly appreciated. I could see them really taking the training wheels off the concept in season two and then who knows where the series will take them?

Wherever they go, I am along for the ride. They are wise to pair J.K. with venerable stars such as Olivia Williams, Stephen Rea and Richard Schiff, but this is really J.K.'s world and we are all just living in it.

I will say that one pleasant discovery for me was the work of relative newcomer Sara Serraiocco. She hasn't spent a lot of time in front of American cameras, so she brings a fresh face to her role and it really helps to sell her character. She is incredibly gifted and will undoubtedly find plenty of work in Hollywood if she decides to pursue a career on this side of the pond.

Counterpart: The Complete First Season is a nice package that really allows the series to speak for itself. They do include two featurettes that provide a nice behind-the-scenes look at the series, but overall, the 10 episodes sort of speak for themselves. The good news is that there is still plenty of time to digest this series before it returns on Starz in 2019. Unlike most TV series these days, I would not recommend binging Counterpart. There's something to be said for allowing each episode to sit and burn inside of you for a few days before moving on. 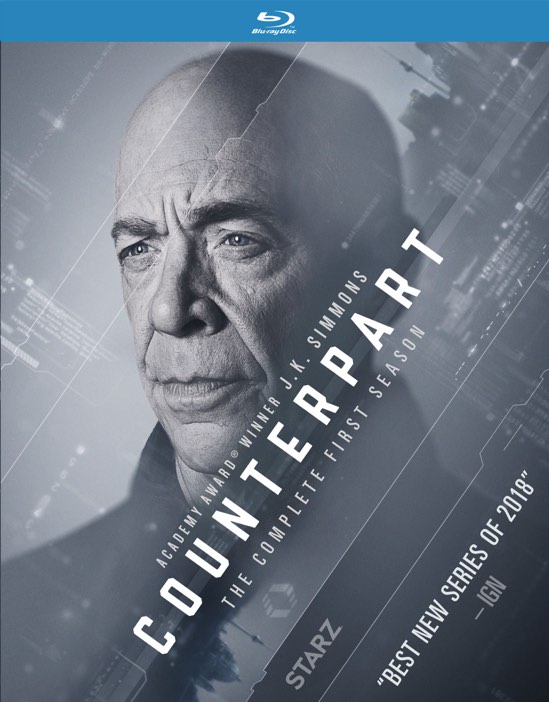 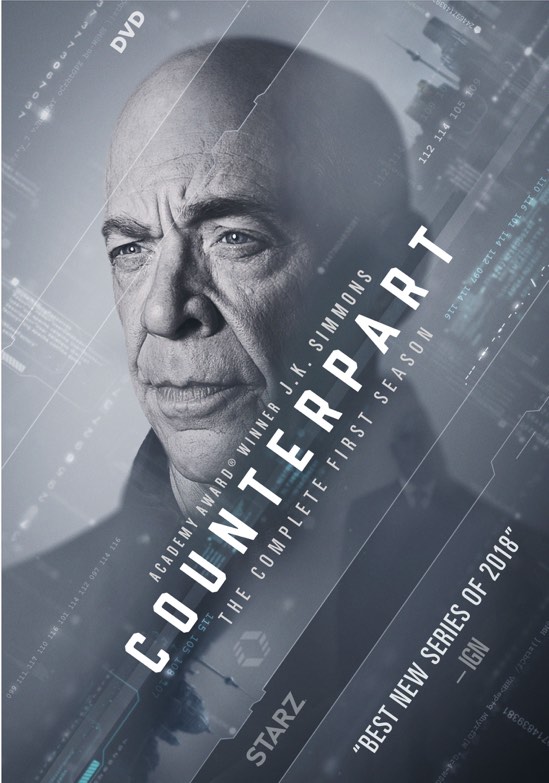