Review: 'I am Vengeance' is a wannabe action film 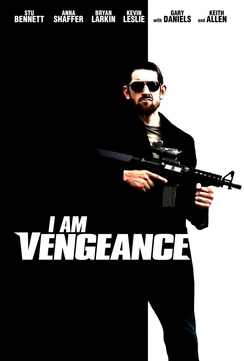 I admit it. I'm a sucker for action movies with British accents. I'm not really sure what it is, but there's just something fascinating about hearing the proper Queen's English roll off the hero's tongue before he shoots or otherwise incapacitates a bad guy.

It's why I could sit back and watch Lock, Stock & Two Smoking Barrels or Snatch on an endless loop and be happy. Basically, any film that stars Vinnie Jones will fit the bill.

Sadly though, Vinnie Jones does not appear in I am Vengeance.

Instead, Stu Bennett capably fills in as an ex-Special Forces mercenary named John Gold who loses it when his best friend is killed. Now, he seeks retribution for his buddy while continuing his friend's investigation into a rogue unit that went off the rails in Afghanistan.

If you read that or watch the trailer and think to yourself, 'Man, I just saw that movie," you wouldn't be off your rocker. No, these revenge films are a dime a dozen these days thanks to Taken and John Wick. Of course, revenge tales are evergreen in Hollywood with similar storylines popping up in everything from the Rambo series to The Crow.

To that end, there really isn't anything new in I am Vengeance that is revelatory. The film does mix in a bit more humor than their peers, but some might say that there is too much comedy for the tone of the film. Personally, I found some of the comic relief much-needed to help with the slow pacing of the 90-minute film.

The stand-out performance from I am Vengeance is that of lead actor Stu Bennett. This is critical as he's pretty much in every scene, so a weak performance would have truly sunk the movie's fortunes. As it stands, Bennett demonstrates enough panache that is leftover from his wrestling days to help carry many a direct-to-video B movie such as I am Vengeance.

Can Stu make the transition to breakout action star much like the ones traveled by the likes of Dave Bautista and John Cena? Perhaps. Just don't expect to wake up one morning to find Stu Bennett headlining every blockbuster at the box office ala Dwayne Johnson.

The Rock is a once in a lifetime story and whomever he sold his soul to will surely come knocking soon. That said, Stu does demonstrate enough acting chops to prove that this foray into acting isn't something that he devised on a lark. No, I think it's safe to say that we will see more from Stu in the future, but it remains to be seen if he can cultivate his particular strengths into something more. If not, there are always a ton of action films looking for his body type in both the lead and villain roles.

As it stands, I am Vengeance will satiate the bloodlust of die-hard action film lovers, but it won't satisfy for long. It's the type of film that is easily digested and forgotten about before the credits stop rolling. There's nothing wrong with these type of films, but it's hard to recommend buying the film for a one-time purchase. Save your money and rent it instead. Then, use the saved money to splurge on better British action fare, say something from Guy Ritchie to scratch this particular itch.

I am Vengeance is now available on DVD and Blu-ray.