Review: 'Galveston' is a slow-burn winner 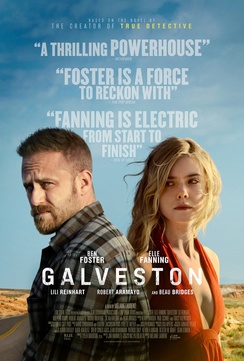 If there is one actor in Hollywood that I will drop everything to see his work, it's Ben Foster. I'm constantly shocked by the general level of apathy he receives from those in power to bestow acting awards as he continues to churn out award-worthy performances.

In fact, his name is probably one that will make most of you go, 'Who is that again?' Such is the price of being such an amazing chameleon. While I think he first caught my attention hard in Alpha Dog, most of you will probably first place him from his work in 3:10 to Yuma. If you haven't seen Hell or High Water, what are you waiting for?

No, seriously, go watch that film and then we can continue.

Meanwhile, Elle Fanning is the lesser Fanning (in age only I assure you) who has also been burning the rocket fuel to A-lister since her breakout in Super 8. She has been around Hollywood her whole life, appearing in many of the same movies as her older sister Dakota, but since J.J. Abrams anointed her in Super 8, she has been out of this world.

This week, the pair team up in a wonderful Southern noir film Galveston. Foster plays an aging hitman who is double-crossed in his latest job and after shooting his way, he rescues a prostitute played by Fanning. The pair hit the road and seek safety and sanctuary in Galveston. If only it were that easy...

Your immediate suspicions might lead you to a typical Bonnie and Clyde story arc where the hitman and the hooker fall in love and live dangerously for the rest of their lives, but you would be wrong. This is less True Romance and more Red Rock West.

The conventional love story is thrown out the door as Foster's Roy takes on more of a brotherly role for Fanning's Rocky. There are reasons that I'll let you discover for yourselves, but suffice to say it was refreshing not to see a haphazard romance shoehorned into the slow-burning narrative.

This isn't a love story, but rather a tale of redemption and revenge. It's two people that come together at precisely the right time and provide the other with exactly what they need at that moment. As someone who is staring down a gun both literally and figuratively Roy sees a path to redemption by saving Rocky.

Likewise Rocky is able to give Roy a greater purpose and allow him to build something positive after a life of destruction, both to himself and his victims. The pace of the film is slow and sultry like any good Southern noir and Foster and Fanning are up to the challenge. The pair do the yeoman's work with the camera time and they do not disappoint.

I was fortunate to review the 4K UHD version of the film and the HDR performs spectacularly in the many dark scenes. The various blacks create an ambiance in the shadows that only adds to the film's enjoyment. Many of the sequences are dingy and dank which only come across more vividly on the 4K transfer.

These two young actors are building up impressive resumes and Galveston will surely be an underrated gem on both of their credits. It is refreshing to see such a different take on the genre and I wasn't surprised to see that the film was written by True Detective creator Nic Pizzolatto.

Galveston is currently available on 4K UHD, Blu-ray and DVD.