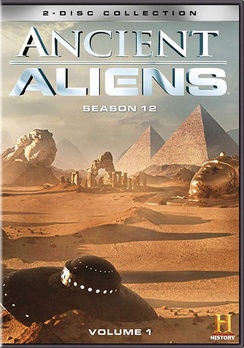 There are fewer shows recently that have transcended popular culture as successfully as Ancient Aliens. I'm not sure if it's our obsession with the unknown and the possibility of life on other planets, or this guy.

Yeah, it's probably mostly Giorgio A. Tsoukalos, aka the "Aliens guy."

Is there anyone living a better life these days than Giorgio? I mean the only way it could get better is if aliens showed up outside his home and asked him to fly across the galaxy with him. Whatever drugs he's on, I want some.

But Giorgio is mostly harmless and who doesn't appreciate his passion and joviality? And sadly, he's not the reason behind one of History Channel's most successful shows. The fact of the matter is that Ancient Aliens combines mankind's innate curiosity of little green men with a high production value to create compelling TV for nearly 200 episodes.

While several episodes might seem repetitive, I have always been impressed with the show's ability to reframe much of the same content in ways that makes it appear fresh each time. For instance, the first episode of Season 12 revolves around the U.S. military's involvement with alien research and namechecks Project Bluebook and Project Sign that have popped up throughout the series.

There are several themes that pop up in the series and Season 12 spends a good amount of time in fleshing several out with new research. For instance, several episodes link the Egyptians to aliens and rightfully so, but an early episode in Season 12 hints at the link between King Tut's curse and aliens. For those of us that are true devotees of the show, we know that they come back to this idea of alien viruses in the current season.

Thus, Ancient Aliens: Season 12, Volume 1 serves as a sort of companion to the current season in many ways. While a show naturally will build upon itself over time, it's quite prescient for Lionsgate to release these episodes while airing followup dialogs on the same topics on the History Channel. That synergy is undeniable and would certainly blowback Giorgio's hair.

As the show approaches 200 episodes and 15 seasons, it's time to reflect upon its cultural impact and what is still left in the tank. I have to admit that I didn't realize that there was as much evidence for Ancient Aliens to support the existing output, much less anymore. And yet, the series continues to find a way.

However, short of any new evidence turning up - which is entirely possible - I have to wonder if the show's best days are behind them. It seems that the History Channel has made a concerted effort of late to pivot to more scripted fare such as Project Blue Book and that has been paying off for them handsomely.

Of course, a show like Project Blue Book is the perfect companion piece to Ancient Aliens and perhaps the two shows will fuel the other for more seasons. Anything is possible, but I do know one thing. If there's any single person in the world that I would never count out, it's Giorgio A. Tsoukalos.

It's quite possible that Giorgio could single-handedly carry this show for another 10 seasons. And who knows? By then, the aliens might return and Giorgio will get to experience his life's greatest desire, to mingle with these Ancient Aliens.