Review: 'The Courier' delivers on its promise 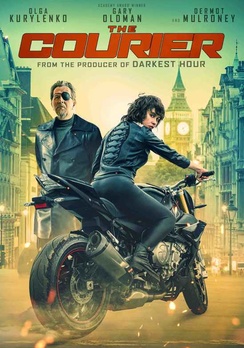 Sometimes I just don't get critical movie reviews. These jaded, staid supposed purveyors of good taste can't just check their brains at the door and enjoy a film for what it is. No, they need to prop up their fragile ego, by expecting that each and every movie be the next Citizen Kane, Animal House or The Matrix.

Spoiler alert: The Courier isn't any of these, although it does tend to fall into the action-heavy camp of The Matrix more than anything else. But that's OK.

Not every film needs to evoke navel-gazing introspection or a revelation for the audience. No, it's quite OK for a film to be a disposable experience that you can enjoy in the moment and never think about again. The Courier isn't without its flaws, but it's also far from the bottom of heap entertainment that some critics would have you believe.

Former Bond girl Olga Kurylenko takes the lead here as a motorcycle courier tasked with unknowingly delivering poison-gas bomb to take out a witness against a vicious crime boss. When the plot fails, the courier grabs the witness and must outmaneuver the boss' henchmen to keep them both alive long enough to survive the night.

I am an unabashed fan of Gary Oldman, so it was too much of a hard-sell to get me to review The Courier. While his performance is up to his usual high standards, I was more taken aback by the work turned in by Kurylenko.

Outside of Quantum of Solace, I wasn't all that familiar with her work. I enjoyed her performance in Oblivion, but beyond that I couldn't have told you what else she has been in before I looked her up for this review. Now, I have to go back and watch and re-watch her catalog because as much as I enjoyed Seven Psychopaths, I don't remember her being in the film.

In The Courier, she plays the mysterious titular character with a mysterious back story that they only hint at in the film. It seems that the script was being a bit cute here expecting this film to launch a franchise that just never came to fruition. It's too bad because I think most of The Courier's faults could have been corrected with a few revisions to the story.

As it stands, Olga Kurylenko is a willing participant and she's clearly all-in from the jump. In a world where it seems that most action heroes are skewing back towards a male dominance, it's refreshing to see a woman kick some actual butt. And kick it she does in The Courier.

I don't want to give away too much of the film, but the action unfurls in an almost real time effect that helps to increase the tension without giving you enough time to think about the script's plot holes. As I mentioned, The Courier is far from perfect, but it's a good blend of mindless action violence that fans of the oeuvre crave from similar direct-to-video offerings in this genre.

While Gary Oldman gets top billing here, this is really Olga's show from start to finish. Thematically (and by screen time), this film reminded me of Oldman's other recent direct-to-video entry Killer Anonymous. While he's given more to do this time around, the action is still centered away from the actor for the majority of the film, which while a tad disappointing, does allow him to bring his A-game when he does take center stage.

You mileage may vary as is often the case with these type of films, but if you're looking to give your brain a rest and watch a gory body count pile up, then there are far worse options out there. The Courier is now available on Blu-ray and DVD.