Review: 'Trolls' brings their 'World Tour' to a triumphant end at home 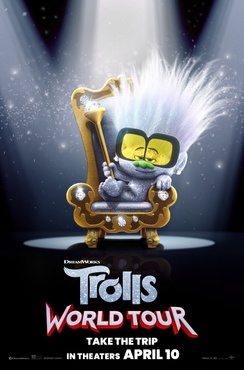 At some point in the near future, Trolls: World Tour might be the answer to an obscure bar trivia question that will net you a million dollars - or at least a free round of drinks. That question will likely be some form of what film was the most successful direct-to-video release of all time?

Unfortunately, my crack research in which I spent a whole ten minutes looking for the current direct-to-video champion yielded no clear-cut answer. Regardless of which terrible Disney sequel like The Return of Jafar or The Lion King 1 1/2 is the reigning champ, they will soon be surpassed by Trolls: World Tour.

This is a small consolation for Dreamworks and Universal which surely had Trolls: World Tour pegged for an early summer smash hit raking in hundreds of millions of dollars at the box office. But that was before COVID-19. After the pandemic swept across the country and forced megaplexes to shutter for over three months and counting, studios were left scrambling for plan B or plan C.

Some studios opted for the delay and pray tactic which has practically forced the entire summer slate of blockbusters to be pushed into this winter or 2021, while others took a more non-traditional approach that might become a harbinger of things to come.

Universal opted to release Trolls: World Tour under the long-dormant and thought to dead Premium Video On Demand (PVOD) strategy. Basically, it's a page out of the cable playbook where you pay a premium to rent a movie for a set number of nights to view it within your home. You don't own it, but you can watch it as many times as you wish in that time frame.

Universal claimed a PVOD "record" of sorts when it claimed that Trolls: World Tour had earned $95 million in the first 19 days of release on PVOD. Sure, that's a big number, but it's a safe bet that had the film been released theatrically, it's box office earnings would have been double that number in the same timeframe. The original Trolls earned $350 million worldwide during its release and animated sequels to box office hits tend to perform better than their predecessors.

The real question is how will Trolls: World Tour perform when it's released on home entertainment. With its debut on 4K UHD, Blu-ray and DVD today, we will have our answer shortly. Will there still be a desire to own the film after already seeing it in the home? Or will sales on packaged media take a dive?

In Trolls: World Tour, Barb, a hard rock troll, wants to destroy all other forms of music so that rock and roll can reign supreme. Poppy and Branch and a menagerie of their friends set out on a musical odyssey to unite all the various musical styles and stop Barb before she unwittingly destroys their world.

Trolls was one of those films that snuck up on everyone and took the world by storm. I didn't know much about it going in, but it didn't take long for the fun and whimsy to completely wash over me. The original film was a more traditional fairy tale while Trolls: World Tour banks on the musical form to carry its story.

For the most part, the experiment works and the film is a clear hit for the younger set. As a child at heart, I found it enjoyable to check back in with these characters, but I thought there was something missing from the sequel that might make it a tougher watch for adults. That's not to say that I didn't enjoy Trolls: World Tour, because I did quite a bit. It's just that when you hold it up next to the original movie, Trolls: World Tour is just a notch below its predecessor.

For me, I think the biggest issue is the complete lack of Bergens in the new film. Aside from Poppy, my favorite character from the original film is Bridget and her absence was quite noticeable in Trolls: World Tour. Part of that is the phenomenal voice work from actress Zooey Deschanel, but more than that there is real chemistry formed between Poppy and Bridget that just leaves the viewer wanting for more.

To be fair Bridget and King Gristle do show up for a small cameo (in the middle of the credits!), but that only underscores their absence for the rest of the film. To a certain extent, I get it. The filmmakers didn't just want to retread the same old story that so many sequels offer. I respect that, but I have to think that they could have found a way to organically weave these characters into the fabric of the new narrative.

But the real stars of the show are Poppy and Branch played impeccably by Anna Kendrick and Justin Timberlake respectively. While their storyline is a bit expected and obvious, JT's portrayal of Branch's awkwardness is spot on and really against type of the larger-than-life musician-turned-actor.

The one true benefit of packaged media and homeownership is the added goodies and versions that a rental stream can't provide. All formats come with two versions of the film, the standard movie and all-new "Dance Party Edition." This new, fun version of the film is a real big hit with the under ten set. My kids absolutely adored the sing-along parts and the dance moves. This version truly makes the film a party experience and that's extremely appreciated in these COVID-19 times.

More interestingly, what will the film's unique release strategy mean for future movies released in the midst of the pandemic? Scoob! took a similar path, although it was released early on Warner Bros.' Subscription Video On Demand (SVOD) service HBO Max. Disney also borrowed this strategy with their release of Artemis Fowl on Disney+.

The difference is that it becomes really hard to splice out any incremental revenue from releasing it on their subscription service. Of course, how do you measure the satisfaction a customer gets from unexpectedly getting a first-run film on their subscription service. We are in the middle of the SVOD wars and as people increasingly cut the cord, choices will have to be made.

The one consistent thing that has defied all of the odds to continue to thrive is packaged home entertainment. The reality is that people can't afford to subscribe to all of these services, especially if they simply want to see a Scoob! or an Artemis Fowl or a Stranger Things. At some point it will be cheaper to pick and choose to buy a physical copy that you can own forever without having to worry if it's going to move to a different service next month.

Trolls: World Tour is a trailblazer in this respect and we should reward the studio for having faith in it. Universal could have saved it for their upcoming Peacock streaming service (yes, another streaming option), but they didn't. It's a great film and the physical copy will entertain your little ones for days on end.