Review: Nickelodeon gets scary for 'Are You Afraid of the Dark?' revival 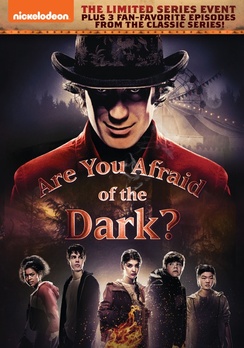 Normally, I'm pretty opposed to remakes or reboots or re-whatever the popular term is these days for regurgitating old content simply to capitalize on the passing of time. The kids that grew up watching the original Are You Afraid of the Dark? are now adults with kids of their own.

So, why not dust off the old formula and hope that lightning strikes twice?

This setup sounds like something ripped from the pages of the Midnight Society of the 1990s, but it's real and last Fall Nickelodeon debuted an updated version of the Midnight Society for a younger generation. And yet, the new take on the classic TV series isn't really for kids anymore, or at least the younger set that the first pass on the material intended to reach.

No, this updated Are You Afraid of the Dark? is geared for those that grew up on horror films from a much-too-young age and is looking for some scary thrills to pass the time. In short, this is precisely the TV series that I wished existed in the 1980s when I was a pre-teen/teen and fully immersed in the horror culture.

A new member of The Midnight Society seeks entry into the campfire club by regaling the members with her own scary story. What starts out as harmless fun, quickly turns ghastly when the tall tale manifests itself in reality and The Midnight Society is called upon to sort things out.

Here's a bit of helpful advice for all the parents out there. If you're wondering if Are You Afraid of the Dark? is appropriate for your 8-year-old daughter, I'm going to answer, probably not. Your mileage may vary, but I was surprised by the terror factor and my daughter didn't make it to the end of the first episode.

I figured that under the Nickelodeon banner, it would be a watered-down version of horror, but I was pleasantly surprised that the series truly is geared for the tween to teen set. My daughter was less than surprised, but I'm sure I'll be paying those therapy bills soon.

Of course, as an adult this darker atmosphere was welcome and I thoroughly enjoyed the throwback Easter Eggs. The three-episode arc really has a Something Wicked This Way Comes feel but sprinkled with just a few more scares. While I was "fine" watching the Disney film at 10 when it came out, I'm glad that my daughter was mature enough to realize that her sleep would be much more enjoyable if she didn't finish the series.

The miniseries features plenty of nods to the original series that ran for seven seasons and really helped to usher in a whole new generation of horror film fanatics. What I found endearing is that there is sort of Scream element to the show where they realize that there are rules afoot, but yet they are forced to put themselves in harm's way anyhow.

The cast is a bunch of relative unknowns to an old fogey like me, but I'm sure the tween set will recognize them from various Nickelodeon shows. But like any good horror film, name recognition isn't really all that important. In fact, the fresh-faced actors were a welcome sight and added an element of unknown to the plot that played out swimmingly.

I found myself comparing this series to both Stranger Things and It where a group of kids is preternaturally called upon to handle situations more suited for a more mature lot. As in those earlier works, the kids prove to be more than up for the challenge and the three-episode arc comes to both a brilliant resolution and leaves you wanting more.

And that is the real question. Back in February, Nickelodeon revealed that Are You Afraid of the Dark? would indeed be coming back for a second installment, but details were fleeting. Would it resemble more the anthology format of the original series, or would it simply be an unrelated miniseries? Would the cast return or would there be all new members of The Midnight Society?

Enquiring minds wanted to know, but then COVID happened and now it's anyone's guess when and/or if we will ever get to see more episodes of this interesting reboot. What the show does have going for it though is the very flexibility that we discussed earlier. It's possible that the original cast may very well "age out" of a tween-set show, but the nature of the beast is that a new group of members for The Midnight Society could easily be had.

This week's DVD offering is truly a great value purchase for the tween horror fan in your life. Not only do you get all three episodes of the recent miniseries, but you also get three fan-favorite episodes from the original series.

I do have to caution you that the original series is not available on DVD. In fact, those older episodes are very hard to find even on streaming platforms, so this show could be a gateway drug to an expensive habit of trying to hunt down original episodes.

The good news is that given the current nature of things, studios are pillaging their catalog to find products that audiences will buy. So, it's a good bet that the show might be seeing a home entertainment renaissance sooner rather than later.

Are You Afraid of the Dark? is now available on DVD.