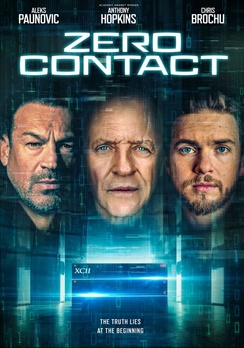 Anthony Hopkins is one of those actors that you could literally watch read the phone book and be mesmerized. After watching Zero Contact, I would welcome some phone books.

Naturally, Hopkins is the best thing about this film, but his presence is fleeting and while his specter certainly hangs over the balance of the movie, it's clear that this one isn't a keeper. You can almost see what the filmmakers were trying to accomplish, bringing the isolation and craziness of the pandemic to the big screen, but the execution was anything but appealing.

Starring Academy AwardÂ® winner Anthony Hopkins (THE SILENCE OF THE LAMBS), this high-tech thriller chillingly reimagines our isolated, virtual world. Hopkins plays Finley Hart, the eccentric genius behind a global data-mining program. Upon his death, five remote agents â including Finley's son â are contacted by a mysterious A.I. entity to reactivate the initiative, which may enable time travel. As sinister events occur at each of the agents' homes, they must decide whether entering their passwords will save the world... or destroy it.

With influences ranging from Person of Interest to Ready Player One, it's apparent that the filmmakers were striving for something that they couldn't deliver. Beyond that, the plot is overly confusing to the point that it really puts a heavy burden on the audience to trudge on through until the end.

And yet, when you get there, the payoff isn't worth the pain of getting to the conclusion. It's pretty obvious that they fast-tracked this movie to try and take advantage of the last two years and our reliance on Zoom and technology to keep in touch with each other. But, the film really would have benefitted from a good script doctor or two as the plotholes were massive and the action was less than compelling.

Instead of getting concerned about our reliance on technology, the characters were boiled down to poorly drawn caricatures. The result is less powerful when you start rooting for them to get killed off. Try as they might, the filmmakers aren't even able to recover from the front-loaded awesomeness that is Anthony Hopkins.

Speaking of Sir Anthony Hopkins, you have to wonder why the actor took on this project. I mean besides the big pile of money that they had to offer him to get involved. While the setup is good, the payoff is dearly lacking in such a way that it makes you yearn for the horrible B movies of yesteryear.

At least they knew what they were and didn't try to be something they aren't. There's a certain respect for the level of honesty that comes from, say, Troma films that Zero Contact seems to miss out on completely.

Beyond the slog of the script, the forced perspective of an online chat is a bit disorienting at first and really doesn't get much better as the movie progresses. Again, the filmmakers are trying to make a point and connect with audiences who have been isolated for the better part of the last two years, but no one is ready for that.

When Tom Hanks was finally rescued in Cast Away, they didn't immediately starve him some more for fun. No, they gave him an insane number of food and beverage choices. In much the same way, it's pretty apparent that film audiences today don't want to look back at the past pandemic. They want to be entertained and cajoled into a safe place - not reminded of the last two years of misery.

Of course, in a way, the filmmakers might be trying to make the same point, but by the time it rolls around, anyone who would care has long left the building. It's unfortunate because I do think there's a promising kernel of a story here, it's just left to die on the vine.

Zero Contact is now available on Blu-ray and DVD.