Crazy on the Outside 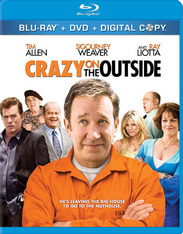 When Tommy (Allen) gets released from the big house, he discovers life on the outside is even crazier than it was behind bars. Tommyâs eccentric sister Viki (Weaver) wonât get off his back, his sexy ex-girlfriend won't leave him alone, and his former partner in crime Gray (Liotta) wonât take no for an answer. Through it all, Tommy might just find the girl of his dreams and get convicted of love in the first degree.