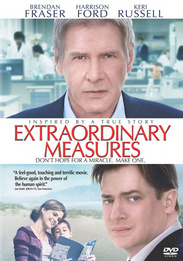 Inspired by a true story, this drama is centered on the efforts of John and Aileen Crowley to find a researcher who might have a cure for their two childrenâs rare genetic disorder. From the Academy AwardÂ® winning screenwriter of Chocolat and Producers of Erin Brockovich! Based on the Wall Street Journal article and subsequent book, âThe Cureâ, by Pulitzer Prize â winning writer Geeta Anand.