Two and a Half Men: The Complete Sixth Season 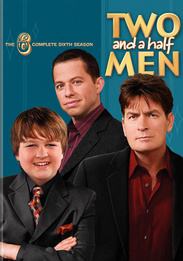 In Season 6, a smart, independent brunette named Chelsea may finally have turned party-boy Charlie into a man. The kind of man who brings you tea when you're sick. Sleeps over at your place, even if he can't watch ESPN in bed. Or makes the ultimate sacrifice: nukes the nudie pix off his cell phone. And there's lots more funny that keeps Two and a Half Men the #1 comedy on TV: Jake locks lips with the cute girl next door, the one whose football-star dad is named Mad Dog. Judith prepares for a midlife baby, who may end up looking a lot like Alan. And Alan dates his receptionist, then ends up in bed with her frisky mom. Life's a beach in Season 6!