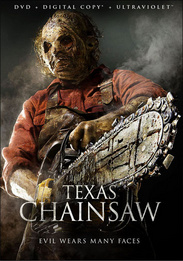 In 1974, enraged townspeople hunt down and kill every member of the Sawyer family for committing a series of grisly murders. Decades later and hundreds of miles away, a young woman learns that she has inherited a Texas estate from a grandmother she never knew she had. After embarking on a road trip with friends to uncover her roots, she finds she is the sole owner of a lavish, isolated Victorian mansion. But her new found wealth comes at a price as she stumbles upon a horror that awaits her in the mansionâs dank cellars.

Rated R for strong grisly violence and language throughout.