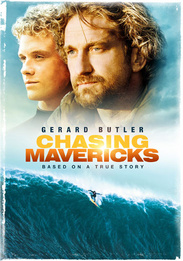 Based on the inspirational true story of surfing icon Jay Moriarty, OF MEN AND MAVERICKS tells the story of a young manâs quest to surf Northern Californiaâs most dangerous wave, and the local legend who takes him under his wing. What begins as a mentorship turns into a unique lifelong bond, as the two unlikely friends discover that there is nothing more powerful than pushing your limits and chasing a nearly impossible dream.

Rated PG for thematic elements and some perilous action.