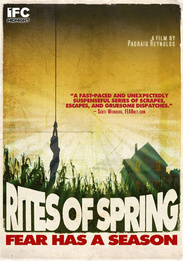 Two horrifying plot threads become inextricably intertwined in the unnerving thriller RITES OF SPRING. Two female office workers are taken captive by the Stranger, a mysterious farmer who must, at the start of every spring, present young women as a ritual sacrifice to a hideous supernatural creature living beneath the farmer's barn. One of the girls escapes and winds up seeking refuge in an abandoned schoolhouse - where kidnappers happen to be holding the daughter of a wealthy socialite for ransom. The frightened intruder puts the kidnappers' entire plan in jeopardy, especially when their poorly chosen hideout becomes a hunting ground for the deadly monster. A unique blend of crime thriller and supernatural suspense tale, RITES OF SPRING shocks from start to finish and showcases a fresh new take on the horror genre.