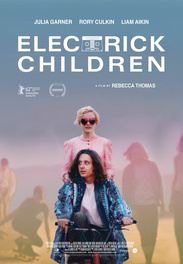 In the debut feature from director Rebecca Thomas, ELECTRICK CHILDREN, Julia Garner (MARTHA MARCY MAY MARLENE, WE ARE WHAT WE ARE, SIN CITY: A DAME TO KILL FOR) plays Rachel, a rambunctious teenager from a fundamentalist Morman family in Utah. On Rachel's 15th birthday, she discovers a forbidden cassette tape with rock music on it. Having never heard anything like it, Rachel has a miraculous experience. Three months later, Rachel turns up pregnant and claims to have had an immaculate conception from listening to the music. Rachel's parents, (Cynthia Watros - LOST, Billy Zane - TITANIC) arrange a marriage for her, but she runs off with her brother "Mr. Will," (Liam Aiken - LEMONY SNICKET'S A SERIES OF UNFORTUNATE EVENTS) to Las Vegas, to search for the man who sings on the tape, thinking he has something to do with her mysterious pregnancy. There they meet Clyde, (Rory Culkin - SCREAM 4), a young rocker who challenges everything they've been taught and changes the way they see the world.