Day of the Falcon 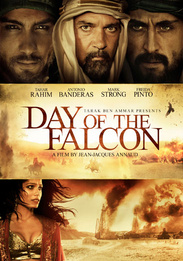 Starring Antonio Banderas (Desperado), Mark Strong (Zero Dark Thirty), Freida Pinto (Slumdog Millionaire) and Tahar Rahim (The Eagle), Day of the Falcon is a soaring epic of honor, greed, betrayal and love from award-winning director Jean-Jacques Annaud (Enemy at the Gates). After years of bloody conflict, the leaders of two rival kingdoms reluctantly agree to end the fighting. But when oil is discovered between their territories, the war is re-ignited. Now it is up to their children â young lovers who have married in hopes of bringing the families together â to find a way to end the violence and bring peace to the land.