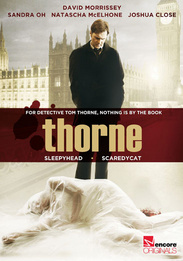 In this acclaimed adaptation of Mark Billinghamâs first two novels, David Morrissey of âThe Walking Deadâ stars as Detective Inspector Tom Thorne, the brilliant but haunted investigator for whom nothing is ever by the book. In âSleepyheadâ, Thorneâs only key to a catching a serial killer is a survivor unable to move or communicate. In âScaredy Catâ, Thorne hunts a psychopath who may have formed a depraved partnership. Through it all, he will clash with colleagues, take shocking risks, and battle the personal demons that could destroy his world forever.