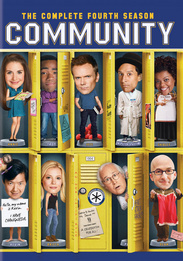 Entering their epic senior year at Greendale Community College, these people arenât just a study group, theyâre family! Theyâll have to be, if they hope to survive a comedy-crammed year with everything from an alienating sci-fi convention, a German re-invasion and a Thanksgiving dinner from hell, to a hostage taking Christmas, a life-changing father/son reunion and even an epic transformation into puppets! In its wildly inventive fourth season, this phenomenal comedy hits an incredibly hilarious, new level! Prepare to âPop! Pop!â with laughter.