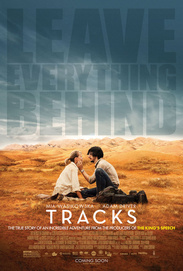 Director John Curran and the producers of THE KING'S SPEECH bring you the film TRACKS, which tells the remarkable true story of Robyn Davidson (Wasikowska), a young woman who leaves her life in the city to make a solo trek through almost 2,000 miles of sprawling Australian desert. Accompanied by only her dog and four unpredictable camels, she sets off on a life-changing journey of self-discovery. Along the way, she meets National Geographic photographer Rick Smolan (Driver) who begins to photograph her voyage.