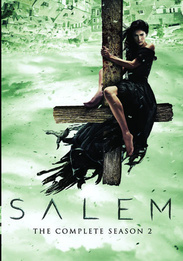 SALEM returns with 13 episodes of a highly anticipated second season at the dawn of a witch war. Salem's ruthless leading witch, Mary Sibley (Janet Montgomery), has just completed the elusive Grand Rite -- a deadly, supernatural ritual that unleashed a devastating plague on the town's unsuspecting citizens. As death and disease continue to spread through the war-torn village, Mary must face off against adversaries old and new -- from within Salem and beyond -- who are vying for her throne in the battle for control over the village. SALEM also stars Shane West as Mary's former love interest John Alden, Seth Gabel as the haunted Cotton Mather, and Tamzin Merchant as the mysteriously talented Anne Hale.