House of Lies: The Final Season 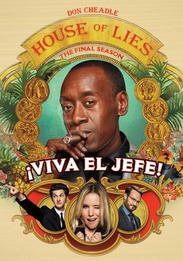 Now that Kaan & Associates is back on top, their biggest mission is staying there. In the fifth and final season of House of Lies, the tight-knit, profit-seeking pod launches life-changing moves with some game-changing tactics. Marty Kaan (Academy Award and Emmy nominee Don Cheadle) and Jeannie Van Der Hooven (Kristen Bell) venture into new romances while they co-parent their baby daughter. Numbers analyst Doug Guggenheim (Josh Lawson) tackles an item on his bucket list by preparing and delivering a Ted Talk, while spin doctor Clyde Oberholt (Ben Schwartz) lends his skills to a mayoral candidate. Together, the team's unconventional management style continues to make corporate waves. And an unexpected offer from the past could alter all of their futures, culminating in a historic series closer filmed in Havana, Cuba.