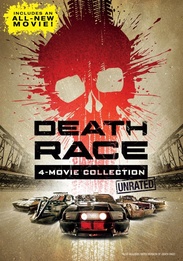 Strap yourself in for an insane thrill ride inside in the Death Race 4-Movie Collection featuring an all-star cast including Jason Statham, Danny Glover, Tyrese Gibson, Danny Trejo, Ving Rhames and Zach McGowan. Death Race is the brutal racing sport, where hardened criminals and smoking-hot navigators drive to survive or die trying. Packed with incredible stunts and brutal fight scenes, get ready for the non-stop barrage of high-octane thrills that will leave you pinned to your seat! The collection includes Death Race, Death Race 2, Death 3: Inferno, and Death Race: Beyond Anarchy.