It's Always Sunny in Philadelphia: Season 13 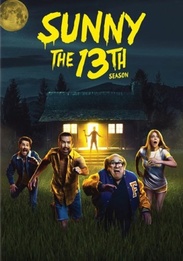 The Gang returns... mostly.... in the 13th Season of the FXX original comedy series IT'S ALWAYS SUNNY IN PHILADELPHIA. Mac (Rob McElhenney), Charlie (Charlie Day), Dee (Kaitlin Olson) and Frank (Danny DeVito) return to their duplicitous, scheming ways at Paddys Pub, while Dennis (Glenn Howerton) takes on the new role of father in North Dakota. Last season, the Gang experienced new highs - Mac acknowledged his sexuality and Charlie convinced The Waitress, his longtime target of affection, to move in with him and the lowest of lows - Frank became the official beverage sponsor of a terrorist group, Dee helped a man reach rock bottom, and Dennis was investigated for murder. Even without Dennis Reynolds, the Gang has its hands full as Charlie hopes to have a child with The Waitress, Mac sets out to understand his newfound sexuality, Dee takes feminism to new heights, and Frank goes to great lengths for the Gang to experience the greatest moment in Philadelphia sports history an Eagles Super Bowl victory.